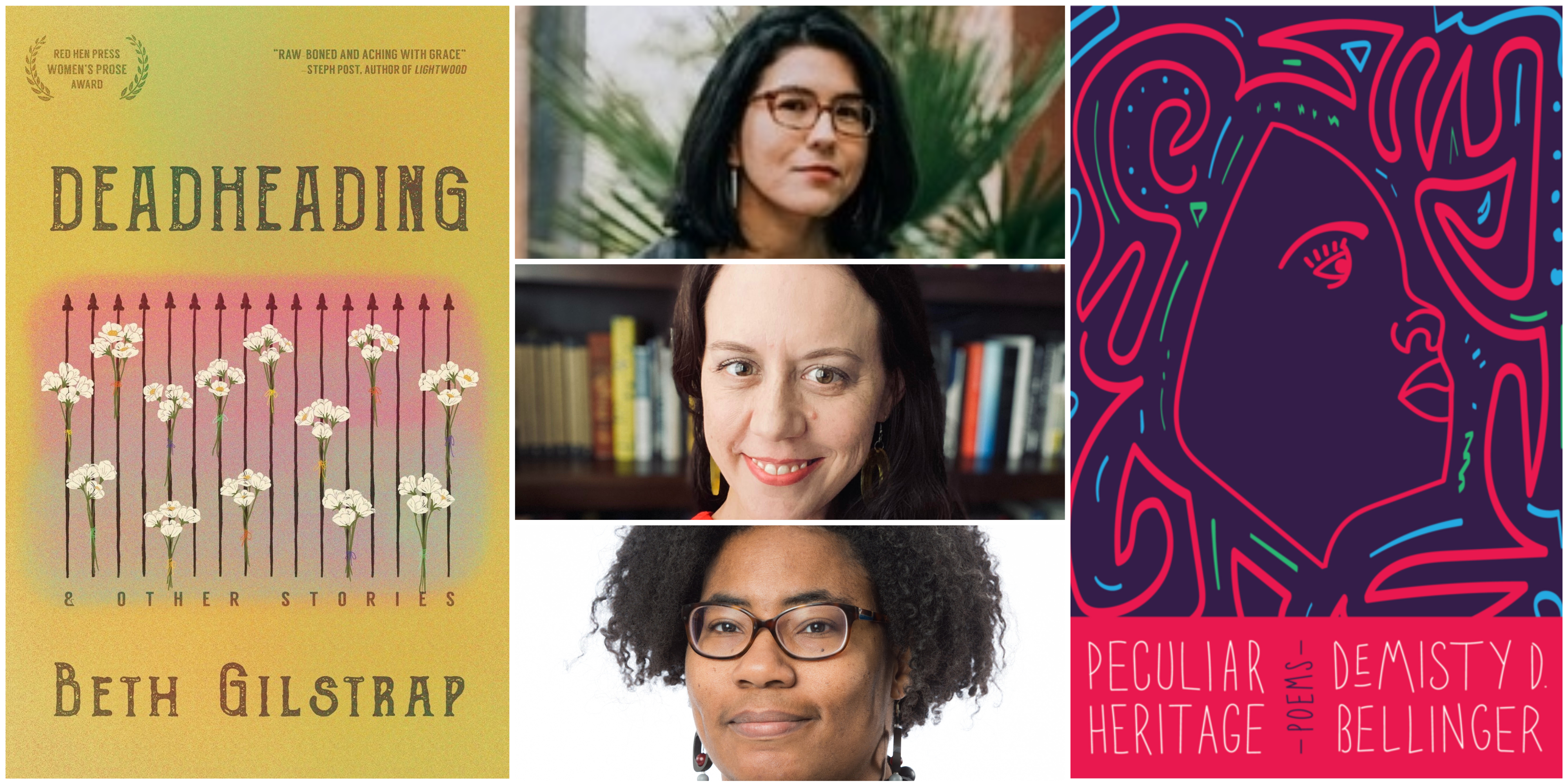 A Room of One's Own welcomes authors Beth Gilstrap (Deadheading and Other Stories), DeMisty D. Bellinger (Peculiar Heritage), and Ursula Villareal-Moura (Math for the Self-Crippling, forthcoming 2022) for a virtual conversation on Crowdcast!

About Deadheading and Other Stories: Irrevocably tied to the Carolinas, these stories tell tales of the woebegone, their obsessions with decay, and the haunting ache of the region itself—the land of the dwindling pines, the isolation inherent in the mountains and foothills, and the loneliness of boomtowns. Predominantly working-class women challenge the status quo by rejecting any lingering expectations or romantic notions of Southern femininity. Small businesses are failing. Factories are closing. Money is tight. The threat of violence lingers for women and girls. Through their collective grief, heartache, and unsettling circumstances, many of these characters become feral and hell-bent on survival. Beth Gilstrap’s prose teems with wildness and lyricism, showing the Southern gothic tradition of storytelling is alive and feverishly unwell in the twenty-first century. Deadheading is the winner of the 2019 Red Hen Press Women's Prose Prize.

Beth Gilstrap is also the author of I Am Barbarella: Stories (2015) from Twelve Winters Press and No Man’s Wild Laura (2016) from Hyacinth Girl Press. Her stories, essays, and hybrids have appeared in Denver Quarterly, Wigleaf, Volume 1 Brooklyn, New Flash Fiction Review, and the Best Microfiction Anthology, among others. Born and raised in the Charlotte area, she recently relocated to Louisville where she lives and writes in an ornery old shotgun house.

Peculiar Heritage explores how we live in a country built on freedom, individualism, and exceptionalism, but only for the ruling class. The shock of American violence and hate shouldn’t be shocking at all. This is our peculiar heritage from an ugly institution. Still, we are not without resistance and Peculiar Heritage, a collection of imagery and rhythm-heavy poems, is a resistance narrative to the present political climate and a regime in the U.S. that rejects culture and inclusion.

DeMisty D. Bellinger is the author of the poetry collections Peculiar Heritage (Mason Jar Press, 2021) and Rubbing Elbows (Finishing Line Press,  2017), and the forthcoming novel New to Liberty (Unnamed Press, 2022). A graduate of the MFA program at Southampton College and the PhD program at the University of Nebraska, DeMisty is the poetry editor with Porcupine Literary and with Malarkey Books. She also teaches creative writing and women, gender, and sexuality studies at Fitchburg State University in Massachusetts.

Ursula Villarreal-Moura is the author of Math for the Self-Crippling (2022). Her stories, essays, interviews, and reviews have appeared in various publications including Tin House, Catapult, Prairie Schooner, Story, Midnight Breakfast, Gulf Coast, and Bennington Review. Her writing has been nominated for Best of the Net, the Pushcart Prize, Best Small Fictions, and one of her stories was listed as distinguished in Best American Short Stories 2015.

Deadheading and Other Stories (Paperback)