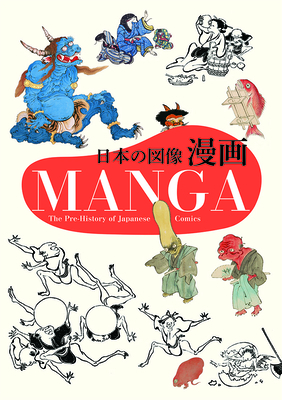 By Nobyoshi Hamada
$39.95
Email or call for price.

The influence of manga on international comics has grown considerably over the past two decades. The origins of manga can be traced back to the Edo Period of Japanese history (1600-1868), specifically to popular type of books using ukiyo-e, or Japanese woodblock prints. These early manga books contained humorous content and featured humans, fantastical creatures and even references to celebrities of the period. (Japanese/English bilingual) As literacy rose in Japan throughout the 18th century (during the Edo Period) and into the 19th and early 20th Century (during the Meiji Period), this kind of illustrated novel became popular; it is from here that we actually see the first recorded use of the term "manga" to describe a words-and-picture-based story. This title features foundational works of manga dating from the 17th to the early 20th century and presented in chronological order. It is a great resource for graphic designers and comic book artists. Japanese art lovers will also find some great works by well-known ukiyo-e artists such as Kuniyoshi Utagawa, Hokusai Katsushika and Yoshitoshi Tsukioka.