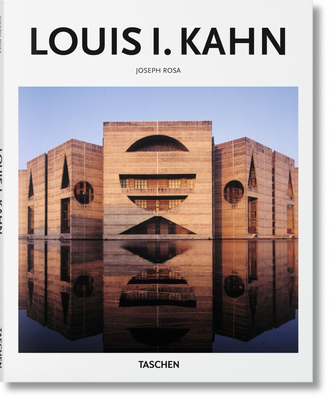 By Joseph Rosa, Peter Gössel (Editor)
$20.00
This item is out of stock with our warehouse. Some recently published books may be in stock @ Room. Email to check.

Louis Isadore Kahn (1901-1974) treated each building like a temple. Across the United States, in India, Bangladesh, Pakistan, and Israel, his designs combined the sleek, utilitarian surfaces of modernism with a devotion to geometric forms and a reverence for natural light that suffused his stuctures with a monumental and breathtaking spirituality.

This essential introduction brings together 17 of Kahn's most important buildings across his cultural, governmental, religious, and residential repertoire. Plans, views, descriptions, and quality photographs trace the context and development of each project, while an introductory essay explores Kahn's unique architectural ideology and his legacy as one of the most important 20th-century American architects since Frank Lloyd Wright.

Through Kahn masterworks, such as the National Assembly Building in Dhaka, Bangladesh, or Kimbell Art Museum in Fort Worth, Texas, we'll explore Kahn's his "back to basics" grammar inspired by ancient sites in Italy, Greece, and Egypt; and his unique vocabulary of mass, void, and light that suffused the International Style with a near-celestial luminescence.

Born back in 1985, the Basic Art Series has evolved into the best-selling art book collection ever published. Each book in TASCHEN's Basic Architecture series features:

an introduction to the life and work of the architect

the major works in chronological order

information about the clients, architectural preconditions as well as construction problems and resolutions