On Capitalism and Inequality: Progress and Poverty Revisited (Paperback) 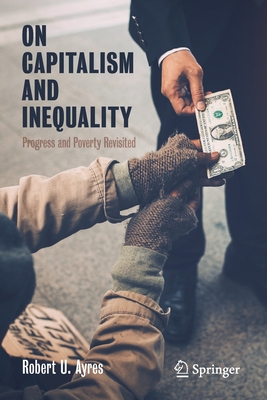 Capitalism is under attack. Defenders say that capitalism has raised billions of people from poverty. But a central activity of capitalism today, Wall Street style, is speculation (gambling), using other people's money, and privatizing the profits while socializing the debts. Skeptics argue that capitalism has redistributed the wealth of the planet in favor of a very few, meanwhile leaving the planet in bad shape and leaving billions of people out in the cold. Wealth is now extremely mal-distributed, opportunity is far from equal, and upward social mobility has declined significantly in recent decades. This book reviews the evidence and arguments pro and con in considerable detail.

The evidence is mixed. The main virtue of capitalism is its emphasis on competition as a driver of innovation and, thus, of economic growth. It is true that economic growth has accelerated in recent centuries, and it is true that billions of people have been lifted from poverty. But it is not necessarily true that intense "winner take all" competition in the marketplace is the explanation for growth. Neoclassical economic theory posits that self-interest is the primary motive for all economic decisions, leaving little room for cooperation and even less for altruism. The theory applies to an unrealistic "model" of human behavior, known as Homo economicus or "economic man", whose characteristic activity is buying or selling.

The reason for using the adjective word "social" - as in socialism" or "social service" or "social democracy" -- is, essentially, to deny those postulates of standard economic theory. Real humans are not rational utility maximizers (whatever that is) and very often do things that are not in their own personal best interests. This can happen because other interests, such as family loyalty, professional, religious, or patriotic duty, may take precedence. Real people rarely behave like Homo economicus, who has rivals but no friends. He (or she) does not trust anyone, hence cannot cooperate with others, and can never create, or live in, a viable social system (or marriage). Yet social systems, ranging from families and tribes to firms, cities, and nations do (and must) exist or civilization cannot exist. A viable social system must not allow "winner takes all". It must reallocate some of the societal wealth being created by competitive activities to support the young, the old and the weak, because all of those people have equal rights, if not the same luck or the same skills.

Both competition and cooperation have important roles to play. A hybrid capitalism involving both is the only viable solution. The book ends with a specific suggestion, namely Universal Basic Income, or UBI.

Professor Ayres holds a PhD in Mathematical Physics from Kings College, University of London, a MSc in Physics from the University of Maryland and a BA, BSc from the University of Chicago. He is currently Emeritus Professor of Economics and Political Science and of Technology and Operations Management at INSEAD, the international graduate business school.He joined INSEAD in 1992, becoming the first Novartis Chair of Management and the Environment, as well as the founder of CMER, Center for the Management of Environmental Resources. He directed CMER from 1992-2000. Since retirement he has been a visiting professor at Chalmers Institute of Technology in Sweden (where he was also a King's Professor) and Institute Scholar at the International Institute for Applied Systems Analysis (IIASA) in Austria, He remains active, producing publications on topics ranging from Industrial Metabolisms and Industrial Ecology, through Environmental Policy and Environmental Economics, to Energy. Professor Ayres is the author or coauthor of 21 books, most recently including The Economic Growth Engine (2009, with Benjamin Warr), Crossing the Energy Divide (2009, with Edward Ayres) and The Bubble Economy (2014).