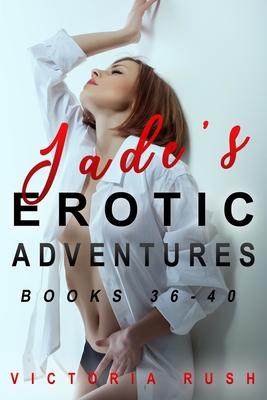 This is book number 8 in the Lesbian Erotica series.

When Jade receives a cryptic party invitation from her friend Madison, she knows she's in for another surprising adventure. But it's not until she arrives at her home and sees a group of her friends crowded around a Twister game mat, that she begins to guess what's in store.

The game starts the usual way, with the teams fully clothed and competing to see who can stay upright on the mat longest. But when Madison asks everyone to take off their clothing in the next round, the fun really begins...

Ever since Jade purchased a digital assistant device for her home, she's come to rely upon 'Lexi' to take care of more and more of her needs. Originally just using her to recommend and play her favorite music, Lexi now helps her find the best movies to watch, and even recommends new recipes for dinner.

When Jade picks up a guy in a bar and they go to her hotel room, she's shocked when he leaves a few hundred dollars on her nightstand. At first, she's outraged that he thought she was a hooker, but then she begins to wonder. If it was that easy to make some extra spending money having sex with hot guys, how far could she take this?

On a lark, she places an ad in an underground newspaper, then goes back to the same bar the following night. A mysterious older gentleman offers to buy her a drink, but she plays hard to get, unsure at first of his intentions. But when he invites her up to his room, she's surprised at his lovemaking skills and even more shocked when he slips her a crisp G-note...

When Jade sees an online ad for a 'bodysex' workshop, her interest is tweaked. But when she learns that it involves a group of naked women learning new sexual techniques under the direction of an intimacy coach, she decides to sign up for a trial session.

The first session starts out innocently enough, with all the attendees just talking about their goals and intimacy issues, and gradually taking off their clothes to become comfortable around one another. As they marvel at the diversity of body shapes and sizes, the coach encourages the girls to lose their inhibitions and begin to touch themselves...

When Jade hears about a club where people enter private rooms to watch each other stimulate themselves, she decides to give it a try. After she gets to the club and pays her entrance fee, she walks down a hallway with a series of open doors.

Behind each of the doors is a room with a single stool and a large glass partition looking onto a room on the other side. In each of the rooms sits a partially naked man or a woman waiting for a partner to engage with.