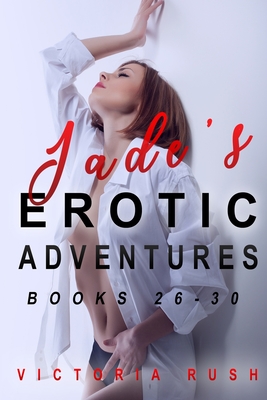 This is book number 6 in the Lesbian Erotica series.

When Jade's best friend invites her to a private women's spa, she gets more than they bargained for. Starting with a relaxing couples massage, the two girls are shocked when they're greeted by two nude masseuses.

But it's not until they get to the rooftop pool that they realize this spa is much more than a typical rejuvenation center. With beautiful naked women parading in and out of the water, it's a feast for their eyes...

When Jade receives a titillating invitation to a special party at her friend Madison's place, her interest is piqued. But it's not until she arrives at her house and is told to strip while Madison places a blindfold around her eyes, that she begins to understand what's in store.

Jade enters the parlor room and is placed in a circle of chairs amongst a crowd of strangers. As Madison introduces the guests one at a time to her choice of partner, the couples explore each other's bodies not knowing if they'll be paired with a man or a woman...

When Jade decides to host a foreign exchange student during her final semester of high school, she's shocked when the girl arrives at her home. Recently turned eighteen, Luna is smart, mature beyond her years, and drop-dead gorgeous.

While Luna settles into her studies at her new school, the two women find themselves growing increasingly attracted to one another. When they begin sharing nude hot tub baths together, the sexual chemistry between them threatens to boil over.

But it's not until Jade comes home early one day and catches Luna playing with her sex toys, that things really begin to get interesting...

When Jade decides to stay at a hostel on her tour of Europe, she's surprised to discover how small the sleeping quarters are. When she heads up to the communal terrace at her first stop in Rome, she meets five beautiful strangers from all around the world.

As the travelers begin to share their experiences and get to know one another, Jade finds herself attracted to a pretty brunette from Brazil. Later that night, in the darkness of their shared dorm room, the two women pleasure themselves in their separate beds while they listen to each other separated only inches apart.

As the sexual tension within the group begins to ramp up and it becomes obvious they're sharing beds at night, they decide to make a game of it. Each day, after they've finished exploring the city together, they draw lots not knowing who they'll be paired up with...

When Jade travels to Marrakesh for a North African vacation, she's captivated by the sights and sounds of the bustling metropolis. But when a handsome and mysterious sheik invites her to join him on his desert caravan, she hesitates deciding to accept his offer.

The next day, she takes a camel ride out to his encampment and is mesmerized by the serene beauty of the Sahara landscape. But when they reach his camp and Amir introduces her to his stable of young and pretty wives, her thoughts suddenly turn to a different form of entertainment...