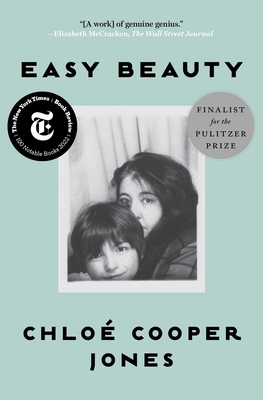 “The subtitle ‘memoir’ doesn't do justice to this spectacular, sui generis meditation on art, disability, parenting, and travel. It's about more than memory — it's about living in the now and creating the future we want for our children.”
— Rebekah Shoaf, Boogie Down Books, Bronx, NY

“I am in a bar in Brooklyn, listening to two men, my friends, discuss whether my life is worth living.”

So begins Chloé?Cooper Jones’s bold, revealing account of moving through the world in a body that looks different than most. Jones learned early on to factor “pain calculations” into every plan, every situation. Born with a rare congenital condition called sacral agenesis which affects both her stature and gait, her pain is physical. But there is also the pain of being judged and pitied for her appearance, of being dismissed as “less than.” The way she has been seen—or not seen—has informed her lens on the world her entire life. She resisted this reality by excelling academically and retreating to “the neutral room in her mind” until it passed. But after unexpectedly becoming a mother (in violation of unspoken social taboos about the disabled body), something in her shifts, and Jones sets off on a journey across the globe, reclaiming the spaces she’d been denied, and denied herself.

From the bars and domestic spaces of her life in Brooklyn to sculpture gardens in Rome; from film festivals in Utah to a Beyoncé concert in Milan; from a tennis tournament in California to the Killing Fields of Phnom Penh, Jones weaves memory, observation, experience, and aesthetic philosophy to probe the myths underlying our standards of beauty and desirability and interrogates her own complicity in upholding those myths.

“Bold, honest, and superbly well-written” (Andre Aciman, author of Call Me By Your Name) Easy Beauty?is the rare memoir that has the power to make you see the world, and your place in it, with new eyes.

Chloé Cooper Jones is a philosophy professor and freelance journalist who was a finalist for a 2020 Pulitzer Prize in Feature Writing. Her work has appeared in publications including?GQ,?The Verge,?VICE,?Bookforum,?New York?magazine, and?The Believer, and has been selected for both?The Best American Travel Writing?and?The Best American Sports Writing. She lives in Brooklyn, New York.

"A rich, decadent book that rewards close reading... anyone who immerses themselves in Chloé's writing will come away with a greater understanding of everything beautiful about the human experience, and how to behold it." —Isaac Fitzgerald, The Today Show

"Easy Beauty is bold, honest, and superbly well-written. Chloé Cooper Jones is ruthless in probing our weakest and darkest areas, and does so with grace, humor, and ultimately, with something one seldom finds: kindness and humanity." —André Aciman, author of Call Me By Your Name

"Jones’ writing is thoughtful and deeply felt, and her stories will fascinate anyone who wants to look at the world in a new way."  —Apple Books (Best of the Month)

"I recommend Easy Beauty to anyone who has wanted beauty badly, even without knowing quite what it is, but who could never seem to access it. At least, I'm that sort of anyone, and I could feel and recognize parts of myself in every moment of this book. Chloé Cooper Jones' writing pierces right through and lets a light in." —Mitski

"A necessary, relentlessly honest book that feels both of the moment and timeless." —Whiting Foundation Judges citation

“Written with the curiosity of a scholar, the compassion of a mother, and the keen insight of a person who has lived on the margins of what is deemed acceptable, Easy Beauty is a rare, poignant gem of a memoir... Transcendent.” —Bookreporter

"Jones resists sentimentality and is as unsparing on herself as she is on other people, yet she writes with such graciousness, too. A wonderful debut." —Buzzfeed

"Soul-stretching, breathtaking... A profound, impressive, and wiser-than-wise contemplation of the way Jones is viewed by others, her own collusion in those views, and whether any of this can be shifted... A game-changing gift to readers." —Booklist (starred review)

“[In her] dazzling debut…Chloé Cooper Jones challenges society’s rules of attraction with razor-sharp wit and intellect….[and] makes a brilliant case for the beauty of complexity.” —Publishers Weekly (starred review)