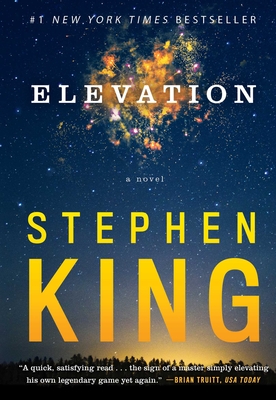 From legendary master storyteller Stephen King, a riveting story about “an ordinary man in an extraordinary condition rising above hatred” (The Washington Post) and bringing the fictional town of Castle Rock, Maine together—a “joyful, uplifting” (Entertainment Weekly) tale about finding common ground despite deep-rooted differences, “the sign of a master elevating his own legendary game yet again” (USA TODAY).

Although Scott Carey doesn’t look any different, he’s been steadily losing weight. There are a couple of other odd things, too. He weighs the same in his clothes and out of them, no matter how heavy they are. Scott doesn’t want to be poked and prodded. He mostly just wants someone else to know, and he trusts Doctor Bob Ellis.

In the small town of Castle Rock, the setting of many of King’s most iconic stories, Scott is engaged in a low grade—but escalating—battle with the lesbians next door whose dog regularly drops his business on Scott’s lawn. One of the women is friendly; the other, cold as ice. Both are trying to launch a new restaurant, but the people of Castle Rock want no part of a gay married couple, and the place is in trouble. When Scott finally understands the prejudices they face—including his own—he tries to help. Unlikely alliances, the annual foot race, and the mystery of Scott’s affliction bring out the best in people who have indulged the worst in themselves and others.

“Written in masterly Stephen King’s signature translucent…this uncharacteristically glimmering fairy tale calls unabashedly for us to rise above our differences” (Booklist, starred review). Elevation is an antidote to our divisive culture, an “elegant whisper of a story” (Kirkus Reviews, starred review), “perfect for any fan of small towns, magic, and the joys and challenges of doing the right thing” (Publishers Weekly, starred review).

Stephen King is the author of more than sixty books, all of them worldwide bestsellers. His recent work includes Billy Summers, If It Bleeds, The Institute, Elevation, The Outsider, Sleeping Beauties (cowritten with his son Owen King), and the Bill Hodges trilogy: End of Watch, Finders Keepers, and Mr. Mercedes (an Edgar Award winner for Best Novel and a television series streaming on Peacock). His novel 11/22/63 was named a top ten book of 2011 by The New York Times Book Review and won the Los Angeles Times Book Prize for Mystery/Thriller. His epic works The Dark Tower, It, Pet Sematary, and Doctor Sleep are the basis for major motion pictures, with It now the highest-grossing horror film of all time. He is the recipient of the 2020 Audio Publishers Association Lifetime Achievement Award, the 2018 PEN America Literary Service Award, the 2014 National Medal of Arts, and the 2003 National Book Foundation Medal for Distinguished Contribution to American Letters. He lives in Bangor, Maine, with his wife, novelist Tabitha King.

“Written in masterly King’s signature translucent style and set in one of his trademark locales, this uncharacteristically glimmering fairy tale calls unabashedly for us to rise above our differences… succinct, magical, timely...charming yet edgy."
— Booklist, STARRED review

“[An] elegant whisper of a story…[Scott] finds a memorable—and quite beautiful, really—way to depart a town made all the better for his presence.”
—Kirkus Reviews, STARRED review

“In this surprisingly sweet and quietly melancholy short novel, King weaves an eerie, charming tale of the ways that strange circumstances can bring people together…King’s tender story is perfect for any fan of small towns, magic, and the joys and challenges of doing the right thing.”
—Publishers Weekly, STARRED review

"There’s a sweetness that feels like something new for King. It’s heavy out there right now. Here’s something that’s not.”
—Gilbert Cruz, The New York Times Book Review

“Delightful…What the slim volume lacks in weight, it makes up in pathos...As Carey’s weight approaches zero and his center of gravity shifts, the book lifts off to an unforgettable and deeply moving conclusion.”
—Susannah Cahalan, The New York Post

“A quick, satisfying read... the sign of a master simply elevating his own legendary game yet again.”
—Brian Truitt, USA Today

"A slim book about an ordinary man in an extraordinary condition rising above hatred and learning to live with tact and dignity."
—Ron Charles, The Washington Post

"Stephen King still has the power to surprise his beloved ‘constant readers.' [King is] a storyteller still at the top of his game. Elevation is a magical tale that entertains and manages to say a little something about the state of our culture in 2018.”
—Rob Merrill, Associated Press

“This is not an offering to be missed. The master is at his impressive best here, and given a chance, it’s a societal story that could actually live up to its title.”
—Tom Mayer, The Mountain Times

“If you’re one of those book lovers daunted by the sheer heft of some of Stephen King’s work, take heart. His tiny new novel, Elevation, clocks in at 146 pages of a story that at first sounds like a dream come true...What happens when gravity can’t hold you down? The answer comes from King’s mind. Enjoy Elevation for what it is: a story about something impossible happening to an otherwise pretty ordinary man.”
—Amanda St. Amand, St. Louis Post-Dispatch

"A melancholy, moving fairytale of sorts, about how tolerance, understanding and forgiveness lift all spirits — figuratively and literally. "
—Emily Burnham, Bangor Daily News

"A welcome antidote to the angry rhetoric of our day."
—Michael Berry, The San Francisco Chronicle

"The kind of story you could inhale in a leisurely hour... rewarding and philosophically complex piece of work, offering both social critique and a meditation on how our different experiences shape our minds.”
—Josephine Livingstone, The New Republic

“A resident with a mystical ailment begins spreading exuberance and kindness, the side effects of his unusual affliction…[a] somber, sweet novella.”
—People magazine