How Architecture Tells: 9 Realities That Will Change the Way You See (Hardcover) 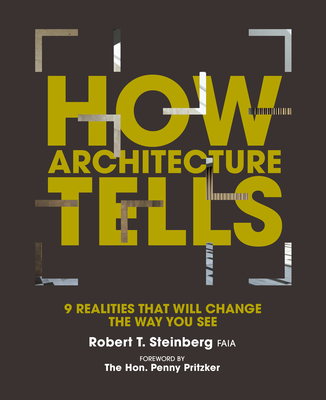 By Robert Steinberg, Gerald Sindell (With), Penny Pritzker (Introduction by)
$60.00

The general reading public is likely to think of architecture as buildings. But, with this book, Robert Steinberg would like to help readers understand that architecture shapes lives. Architecture can help communities integrate and thrive. Architecture can touch us, influencing how we feel, and how we interact with others. In short, architecture can fundamentally improve our quality of life. As a young graduate architect fresh from Berkeley, Steinberg began to discover the potential of architecture to shape communities. Working with his father, an architect who had studied with Mies van der Rohe (and whose father was also an architect), one of Steinberg's first projects was to draft and redraft a parking garage in downtown Silicon Valley, CA. As he mediated between the two architects in charge of the project--his father and the city architect--he noticed that with each evolution, the garage became more beautiful and refined. And with each improvement, this garage became more able to succeed in the goal of reviving the dying downtown core of Silicon Valley. The garage was a huge success, and Steinberg began to codify what he had learned. Thanks to the garage, he wrote the first of what would become the 9 Realities of Architecture: Architecture is the Pursuit of Perfection -- a magnificent take-away from a humble parking garage project. As Steinberg eventually rose to become CEO of his firm and grew it into a global practice with six regional offices including Austin and New York, and a major office in Shanghai, he used his drive for creating thriving communities to eventually touch the lives of countless people around the world.