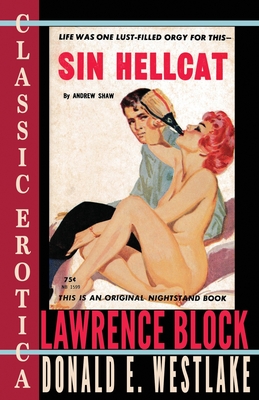 This is book number 22 in the Classic Erotica series.

This is the third novel Donald E. Westlake and I did in collaboration, SIN HELLCAT, and I think it may have been the best of the three--but we didn't get to put a joint byline on it. Well, we did--but someone at Nightstand felt free to change it, dropping Alan Marshall from the "by Alan Marshall and Andrew Shaw" byline we'd supplied. Much the same thing happened to CIRCLE OF SINNERS, my collaboration for Nightstand with Hal Dresner; "By Andrew Shaw and Don Holliday" is what we tagged it, and this time it was Andrew Shaw who got bumped.

Well, it's corrected now. SIN HELLCAT, like its fellows, has both names on the cover. And our names, not the ones we donned for our work in the world of paperback erotica.

When the two of us were starting out as writers, we both served an apprenticeship writing erotic novels for Harry Shorten at Midwood Books and Bill Hamling at Nightstand. (I was Sheldon Lord for Midwood and Andrew Shaw for Nightstand, while Don was Alan Marshall for both publishers. Note though that the presence of either name upon a book is no guarantee that one of us wrote it. Both of us made arrangements whereby lesser writers would submit works under our names--and I know it's hard to believe that any writers were less than we were back then, but it's true.)

It worked, and by God it was fun. The first of our efforts was A GIRL CALLED HONEY, and it started when I wrote a chapter and sent it to Don. And so on, and we stopped when we had a book and sent it to Henry Morrison who sent it to Harry Shorten. We put both our names on the book, our pen names that is to say, and that's how Harry published it: by Sheldon Lord and Alan Marshall. And he included our dedication: "To Don Westlake and Larry Block, who introduced us."

Never mind. Here's SIN HELLCAT--and if reading it brings you a small fraction of the fun we had writing it, you'll be back right away to scoop up A GIRL CALLED HONEY and SO WILLING.