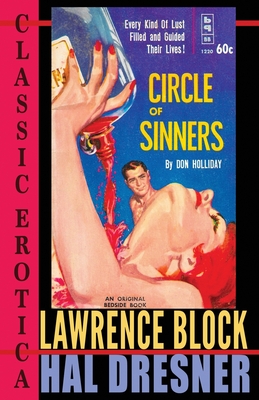 This is book number 20 in the Classic Erotica series.

Because they were collected into a single hardcover volume published by Subterranean Press, a good number of readers are acquainted with my three collaborations with Donald E. Westlake. That's not the case with CIRCLE OF SINNERS, a similar joint effort undertaken with another longstanding (and, I'm pleased to say, still standing) friend and colleague, Hal Dresner. Unlike two of the Block/Westlake titles, CIRCLE OF SINNERS did not bear a joint byline; Nightstand issued it as "by Don Holliday," which was in fact Hal's pen name. (To increase the level of confusion, one book of mine was originally published under that pen name, though I'm not entirely certain why; it's since been reissued by Hard Case Crime under my name and retitled BORDERLINE, and just the other day my Hollywood agent reported a movie guy inquiring about rights. Trust me, nothing will come of it.)

But I digress. It's a pleasure to be able to bring back CIRCLE OF SINNERS, which was both easy and enjoyable to write--and, I can but hope, to read. The model here was REIGEN, a very successful play of Arthur Schnitzler's, better known as LA RONDE, the title of the French-language film by Max Oph ls. The structure--a chain of affairs, which each character in turn hooking up with someone else, served as the model for at least three additional films, beginning with Roger Vadim's CIRCLE OF LOVE in 1964.

Well, Hal and I got there ahead of Vadim, though surely with less impact. I might add that one short novel of Schnitzler's, CASANOVA'S HOMECOMING, was on the shelves of my parents' library, and I had the great good fortune to read it at an impressionable age. (Come to think of it, I don't believe I ever had an age that wasn't impressionable. Never mind.) Schnitzler may have been more of an influence on my development as a writer than I've realized, and I suspect it would be interesting and enjoyable to read some more of his work.

But for now we've got CIRCLE OF SINNERS--complete, in this instance, with the original Nightstand cover. That's something, isn't it?