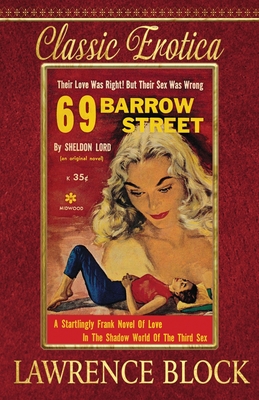 This is book number 7 in the Classic Erotica series.

While my first visit to New York was with my father in 1948, it wasn't until the summer of 1956 that I actually lived in the city. I'd completed my first year at Antioch College and was to spend August through October in the mailroom at Pines Publications on East 40th Street. (They had a paperback line--Popular Library--and a string of magazines, ranging from surviving pulps like Ranch Romances to movie magazines and a Readers Digest imitation.) I'd arranged to room with two other Antiochians, Paul Grillo and Fred Anliot, and we spent the first week on the top floor at 147 W 14th, the second on the ground floor at 108 W 12th (that building's gone now), and then found a first-floor one-bedroom apartment at 54 Barrow Street, where we stayed through October before passing the place on to another Antioch contingent. It was a wonderful apartment in a perfect location, and for a while it was where the folksinger crowd assembled on Sunday evenings after the singing in Washington Square shut down for the night. (Then the crowd outgrew the space, and moved to somebody's loft on Spring Street.) It was in the kitchen at 54 Barrow Street that I wrote the first story I ever sold, published in Manhunt as You Can't Lose.

A year later I was back in New York; I'd found an editorial job at a literary agency and liked it it enough to drop out of school to keep it. I shared an apartment at the Hotel Alexandria on West 103rd Street with Bob Aronson until the Army took him, at which time the hotel let me move to a single room a few floors below. While I lived on 103rd, I spent most of my time in the Village.

By the fall of 1958 I was back at Antioch, more focused on writing than classwork. I'd begun selling magazine stories whileI was at the literary agency, and began writing novels once I'd left, and Harry Shorten was eager to publish them at his new venture, Midwood Tower Books. My third book for Harry, following CARLA and A STRANGE KIND OF LIVE, was 69 BARROW STREET.

I'd had the idea of a novel set at a multiple dwelling--in this case, a Village brownstone--with the characters interacting and living their lives. One model for it would have been 79 PARK AVENUE, an early work of Harold Robbins, when A STONE FOR DANNY FISHER let the world take him seriously as a writer of American realistic fiction. (Then he wrote THE CARPETBAGGERS, and that was the end of that.) I decided--nudge nudge, wink wink--that 69 BARROW STREET would be an appropriately suggestive title.

Jesus, 54 Barrow Street. Fred Alliot and Bob Aronson, both of whom I'd run into now and then over the years, are gone now. Paul Grillo and I lost touch with each other fifty-plus years ago...

Years and years later, I found out that 69 PARK AVENUE had been Harold Robbins' original title. His publishers made him change it. My publishers had no such compunctions, and 69 BARROW STREET it was and shall remain. And now it's back in print, and graced once again by Paul Rader's magnificent cover art.