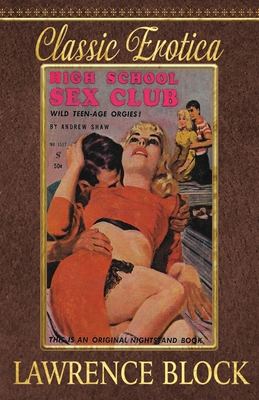 This is book number 16 in the Classic Erotica series.

When I was sifting through copies of my pseudonymous erotic novels of the early 1960s, deciding which books to republish, HIGH SCHOOL SEX CLUB didn't make the initial cut. While it's true that it was once mentioned in the same breath as WAR AND PEACE ("Andrew Shaw's HIGH SCHOOL SEX CLUB is, it must be said, no WAR AND PEACE." --Philomela Triolet, The Hartshorn Review) it could probably disappear forever with the world of American letters being none the poorer for its absence. I know that's hard to believe, given the really classy title I hung on the book, but Im afraid it's true.

So why is it here? I guess because of the book's status as an artifact of its time. I'm not entirely sure of this, I can't document it, but I was given to understand back in the day that several booksellers were brought up on charges for selling HIGH SCHOOL SEX CLUB, and one or two of them may even have gone to prison for it.

This may well seem incredible in the second decade of the 21st century. The reader will note that the book contains none of the seven words the great George Carlin immortalized as "Words I can't say on TV," and Carlin's list itself is quaint enough now that the only seven words you can't utter on that medium are "Why are we watching all this crap?" Those of us who toiled in this particular vineyard made do without such words, and without precisely describing who was doing what and with which and to whom--and bore this handicap stoically while writing with the singular goal of making our books as erotically stimulating as we possibly could.

(A story, perhaps apocryphal, to explain that last sentence. There was this brilliantly talented albeit unpublished writer, I'd been given to understand, who would write one novel after another, each building up to the brink of a conclusion, and then ending abruptly with a one-sentence chapter: "And then the boiler blew up and killed them all." They could be out in the middle of the desert, a hundred miles from the nearest boiler. It didn't matter. That's what he wrote, at least according to this tale told in publishing circles, and one can very likely infer what might have been the seminal event in his own unhappy life.

Never mind. Something evidently made authorities in various jurisdictions across the country single out HIGH SCHOOL SEX CLUB for censorship and suppression. Really? Hard to say, but it seems to be unarguable that Nightstand Books never did a second printing, or any other sort of latter-day reissue thereof. It couldn't have been good taste or literary sensibilities that kept the book out of print, as neither weighed heavily in their decisions. Perhaps it was the book's own history.

In the face of all of the above, could I fail to offer you the opportunity to read the chilling account of Dean Hanson and his adolescent followers? I think not. Here it is, so read it or don't, and make what you will of it.