The Twisted Ones (Classic Erotica #15) (Paperback) 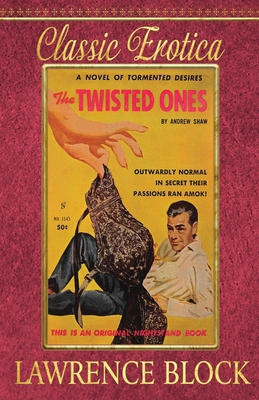 This is book number 15 in the Classic Erotica series.

You might be surprised to learn that back in 1961 Nightstand Books published an inquiry into the heartbreak of scoliosis, but--oh, hang on a minute. You say the title refers to characters who are not spinally but psychosexually bent?

But Dave's lost interest in sex with his wife, as he increasingly becomes obsessed with the desire for a much younger partner. Not a Lolita, exactly, but someone a few years under the age of consent.And Nancy's recalling her college days as what we've since learned to call a LUG. (That's Lesbian Until Graduation. But you knew that, right?)

And Lucy's ready for sexual experience, but with whom? Someone more knowledgable than her oafish boyfriend?

Dave finds a caf in the West 20s where a man named Hassan can supply anything he wants. Nancy finds a job working for a woman named Bobbie, who can supply anything she wants. Lucy finds a man who'll teach her what she wants to learn--and what she doesn't.Can you see where this is going? Well, along the way you'll get to look over Dave's shoulder as he watches a pornographic movie, courtesy of Hassan.

I'm not sure which book was the first in which I employed this device, but the editors at Nightstand thought it was a great way to spice up the books, and I was encouraged to include such scenarios in future books. Well, you know, you didn't have to tell me twice...A Google search advises me that in 1959, two years before this book appeared, Gold Medal published Marijane Meaker's suspense novel, The Twisted Ones, under her pen name of Vin Packer. My guess is that it's a better book than mine, but who's to say you won't enjoy them both?