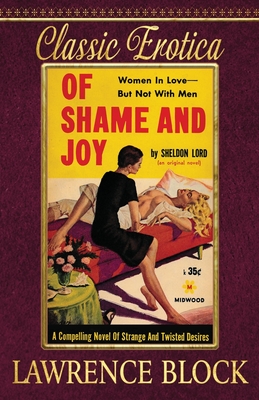 This is book number 11 in the Classic Erotica series.

O Rose thou art sick. / The invisible worm, /That flies in the night / In the howling storm: /Has found out thy bed / Of crimson joy: /And his dark secret love / Does thy life destroy.

Those eight lines constitute the complete text of "The Sick Rose," published by William Blake in Songs of Experience in 1794. I took to Blake early on, and thought Of Crimson Joy would make a dandy title. I accordingly fastened it on this novel when I sent the manuscript to Harry Shorten at Midwood. Someone there changed the title to Of Shame and Joy, and while I was a tad annoyed at the time, I have to say they made the right call. Of Shame and Joy's not only a better title, it's a damn good one.

I remember where and when I wrote the book, although I can't say I recall much of the writing, or indeed of the book itself. It would have been in the late summer or fall of 1959. I'd gone to New York in July, settling in at the Hotel Rio on West 47th Street, planning to stay there until it was time to return to Antioch College for my final year. What I soon learned was that I'd already had my final year at Antioch, at least as far as the school was concerned. I'd written Campus Tramp, my first book as Andrew Shaw, just before they informed me of this decision, and then I went to work on something else, and a bad morning led me to pack a bag and move back to my parents' home at 422 Starin Avenue in Buffalo.

("A bad morning." Is that unnecessarily cryptic? Think of the opening scene in After the First Death, but without the dead hooker on the floor. That's the kind of morning it was, and it led me to conclude that New York Wasn't Working Out, and that maybe I'd do better back in Buffalo.)

And, back in Buffalo, I set up my typewriter on the little maple desk on which I'd written Strange are the Ways of Love and Carla, and resumed writing books for Harry Shorten at Midwood, --and for Bill Hamling at Nightstand, who'd liked Campus Tramp enough to want more. For the next eight months or so I wrote books on that desk. My routine was an interesting one; I'd join my mother at the kitchen table for a cup of coffee around midnight, then write all night, then have breakfast with my dad around seven--and then go to bed. It worked for me, and I found things to do with the rest of my time; notably, I bought a partnership in a coffeehouse, The Jazz Center, and began keeping company with the woman whose ill fortune it would be to become my first wife.

And how did OF SHAME AND JOY fit into all this? Well, the Provincetown setting came from a two-day trip while I was living at the Rio. This girl whom I knew vaguely was going there, and I decided to join her. I remember we took a Greyhound bus, and that her name either was or wasn't Suzy. (But then that's true of almost everyone, isn't it?) We went to P'town, and she had friends there, and I didn't, and I wandered around for an evening and slept on somebody's couch and went back to New York by myself in the morning. I never saw Suzy again, so for all I know she's still there, though it strikes me as doubtful.

Of Shame and Joy has never been republished since its appearance as a Midwood Book, and I'm glad to be able to bring it out again--not least of all for the opportunity to use the wonderful Paul Rader cover. Isn't it gorgeous?