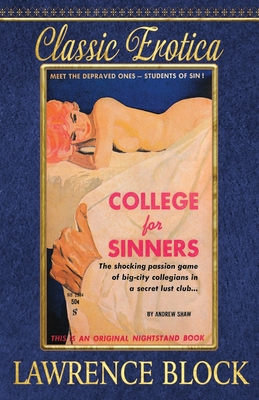 This is book number 10 in the Classic Erotica series.

As far as I'm concerned, the most striking aspect of COLLEGE FOR SINNERS is that it seems to have been the occasion for some unwitting plagiarism on my part.

The dramatist Moliere has a character who's astonished, and not half-chuffed, to discover that all his life he's been speaking prose. Well, I'm every bit as surprised by this revelation, if less delighted with myself for it.

Now in the ordinary course of things I'd have written this off as coincidence, and a fairly commonplace coincidence at that. But here's the thing--I happen to know that I actually did read CAMPUS LOVE CLUB. I remember the byline, David Challon, and remember having learned that the actual author was the prolific and talented Robert Silverberg. I recall reading it, and I recall thinking that it was good of its kind, and then from that day to this I don't believe I ever gave it another thought.

The book I read was published by Bee-Line Books, and the fifty cents I paid for it was more than its author ever saw from the bastards; a bit of surfing shows that Bee-Line failed to pay Silverberg for it, and so a couple of years later he sold it to Midwood, where it was published under another of his pen names, Loren Beauchamp. In the interim COLLEGE FOR SINNERS was published by Nightstand Books under my pen name, Andrew Shaw.

If I thought I was plagiarizing anyone, it was neither Mr. Challon nor Mr. Silverberg. (Mr. Beauchamp was not yet in the picture.) My conscious model for COLLEGE FOR SINNERS, to the limited extent that I had one, was an earlier book called HIGH SCHOOL SEX CLUB. . .by a chap who was calling himself Andrew Shaw.

Indeed. Decades after all of this happened, Bob Silverberg and I finally met and became friends, and in fact presented a joint program at a Bay Area library in 2011, talking about our early days of laboring in the Midwood/Nightstand vineyard. (And a wonderful evening it turned out to be. Go to YouTube, search for "Lawrence Block Robert Silverberg Lust Lords"--and enjoy.)

Did I steal anything from Bob's book? Not consciously, certainly. It was natural enough for me to pick Columbia as a setting, as I'd spent a semester taking courses at that institution's School of General Studies during my year at Scott Meredith. Beyond that, I never deliberately followed any plotline, my own or another's, when I was writing one of these books. I wrote a chapter, and whatever happened in it led me to the next chapter, and so on. Which, now that I think about it, is pretty much the way I've led my life.

Is that enough about COLLEGE FOR SINNERS? I think it had better be. . .