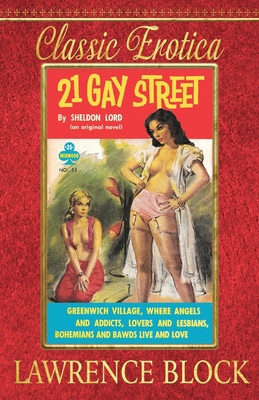 This is book number 1 in the Classic Erotica series.

When Joyce Kendall arrives in New York, fresh out of Clifton College in Iowa, she has a job and an apartment waiting for her. The job's as a first reader for Armageddon Publications. The apartment's at 21 Gay Street, and the small Federal-period house is already home to a lesbian couple, Jean Fitzgerald and Terri Leigh, and an out-of-work newspaperman, Pete Galton.

The relationships of these four people under one roof add up to a fast-paced story that is not only satisfying fiction but a rare window on Bohemian life in the late 1950s. A drug-fueled rent-party-turned-orgy at the apartment of one Fred Koans is just link to a world some older readers may recall.

Gay Street, in the heart of Greenwich Village, runs for only a single block between Christopher Street and Waverly Place. The 1943 movie A Night to Remember portrays 13 Gay Street as the address of the building where most of the action, including a murder, occurs. In 1996, Sheryl Crow made a video on Gay Street for the song "A Change Would Do You Good."

21 Gay Street, a very early Lawrence Block novel, was originally published under the pen name Sheldon Lord. It was never reprinted after its initial publication in 1960 until now.