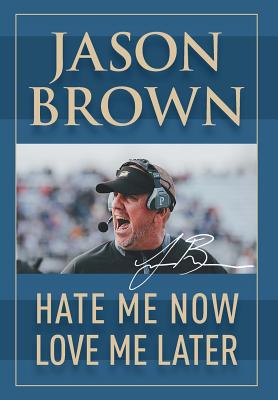 Former NFL player Jason Brown is a recruiter and college football coach. Coach Brown became widely known as the no-nonsense coach on Seasons 3 and 4 of Netflix's smash hit Last Chance U. He currently resides in San Diego, CA with his best friend, Stogie.

"Coach Brown is 1 of 1. A total original. Watching him on Last Chance U was the most interesting thing on TV since The Sopranos. He's the Tony Soprano of football." -- Michael Rapaport, Actor/Comedian

"JB was the first QB I coached at Compton College. Jason's father came to me to make sure I would look after him and I took that task on head first and with honor. Jason not only became my first All-American QB, he went on and did everything he said he would. This book epitomizes who he is: straightforward, driven, emotional, and 100% invested in the WIN." -- Coach Cornell Ward, Former Head Coach, Compton Community College

"I did not have a single college scholarship offer coming out of high school. Jason Brown saw potential in me when no one else did. He helped teach and mold me into a future NFL QB." -- Brad Sorensen, Quarterback, San Diego Chargers, Tennessee Titans, Minnesota Vikings

"Jason and I have known each other for twenty years. I coached against Jason while he was a player and together on the same staff. The general public does not know how caring and committed he is to the well-being of his players. Many outside of his circle fail to ascertain this quality in him but once you get to know JB, you will appreciate Jason Brown." -- Marguet Miller, Head Football Coach, West Los Angeles College