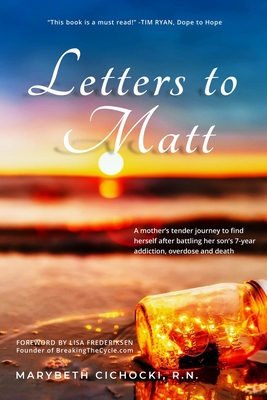 It began with a pop, and then excruciating pain followed by surgery. MaryBeth Cichocki's son Matt became hooked on Percocet prescribed to him for a work-related back injury. As a nurse, MaryBeth knew the dangers of opioids, and cautioned her son against taking too much. Seven years later, her son was dead from a Percocet overdose.

Trying to make sense of her son's addiction and death by overdose, MaryBeth bravely voices the ugly side of addiction and the unimaginable pain that results from loss of a child. Her letters also give hope. Through the years, her writing reveals how she found a way to channel her anger and grief into helping others by advocating for change so Matt's death will have meaning. They also reveal the strength of a mother's love to overcome anything.