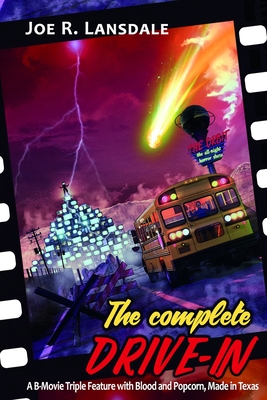 By Joe R. Lansdale
$17.99
Usually Ships in 2-7 Days
All sales of this book are final--it is print on demand and may take up to 2 weeks to arrive.

THE DRIVE-IN: A B-Movie with Blood and Popcorn, Made in Texas

THE DRIVE-IN 2: Not Just One of Them Sequels

THE DRIVE-IN 3: The Bus Tour

The end of the 1980s. Drive-in movie culture is mostly dead with one significant exception: THE ORBIT DRIVE-IN. A drive-in theater so large it houses multiple stories-high screens that fill the sky, and can hold four thousand cars and all the people who can squeeze in them. It's a lit city that fills to the brim on Friday nights, crowds gather for the Dusk-to-Dawn Horror Shows. Horns honk, BBQ grills sizzle, people yell and act the fool, ready for the marathon of one low-budget horror film after another. But then suddenly the world changes in front of their eyes, not on the screens. A comet, red and smiling with jagged teeth, flashes across the sky. People try to leave but find they are trapped by some acidic goo surrounding the entire drive-in. They grow hungry, homicidal and suicidal. Then along comes the Popcorn King, a jiving, rhyming creature formed by blue-white lightning, with four arms and a popcorn bucket on its head. A monster as strange and dangerous and mesmerizing as the creatures and villains on the screens. It offers the starving masses food, but there's always a price to pay for survival. And THEN things start to get wicked...

ABOUT THE AUTHOR
The author of fifty novels and more than three hundred short stories, his work has appeared in national anthologies, magazines, and collections, as well as numerous foreign publications. He has written for comics, television, film, newspapers, and Internet sites. His work has been collected in at least thirty short-story collections, and he has edited or co-edited over a dozen anthologies. Lansdale has received the Edgar Award, eleven Bram Stoker Awards, the Horror Writers Association Lifetime Achievement Award, the British Fantasy Award, the Grinzani Cavour Prize for Literature, the Herodotus Historical Fiction Award, the Inkpot Award for Contributions to Science Fiction and Fantasy, and many others.