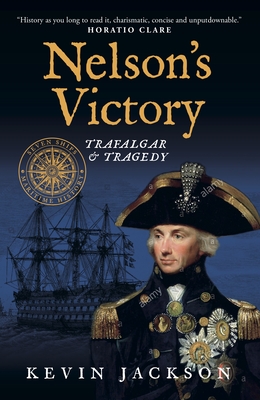 By Kevin Jackson
$12.95
This item is out of stock with our warehouse. Some recently published books may be in stock @ Room. Email to check.

Nelson's Victory is a vivid, gripping account of our greatest naval hero; Jackson's command of detail and story make this one of the best brief maritime narratives ever written. NICHOLAS LEZARD

The fourth title in Kevin Jackson's magnificent maritime history series, Nelson's Victory, explores the remarkable achievements of the British naval and national hero Horatio Nelson and his victory and death at The Battle of Trafalgar. As with other titles in the series, Jackson demolishes the myths that abound about Nelson's nature and reveals the real man behind hyperbole. Nelson was a smooth operator who demonstrated considerable political instincts and worked his way up the naval ladder with ruthless ambition.

History as you long to read it, charismatic, concise and unputdownable. HORATIO CLARE

Kevin Jackson is an English writer, and has worked as a film-maker, radio producer and television director for the BBC; Associate Arts Editor for The Independent. He has written for The New Yorker, Granta, The Sunday Times (London), The Guardian, and Vogue, among other publications. His books have been chosen as a Book of the Week in the Guardian and a Book of the Year in the Express.