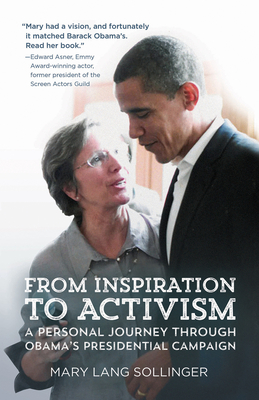 Mary Lang Sollinger offers a fascinating behind-the-scenes look at political canvassing and fundraising while following ordinary people doing extraordinary things for the love of our country.

Mary’s years of fundraising experience culminated in an incredible opportunity to host a fundraiser at her home with Senator Obama in the fall of 2007. Mary believed in all that he stood for and knew that she needed to do whatever it took to help Senator Obama and others seek political offices.

After the huge success of Senator Obama’s 2007 fundraiser, Mary went on to organize twelve fundraisers throughout Wisconsin in fourteen months. As a result of her fundraising successes, she was asked to serve on President Obama’s National Finance Committee, both in 2008 and 2012.

Mary has generously shared many inspirational and invaluable lessons learned throughout her years of experience. Included in her book is an epilogue with nine lessons and examples of successful fundraising for those who may want to host their own fundraising event.

Mary Lang Sollinger grew up in a small town in Wisconsin’s heartland. There were no big things expected of her after high school, no talk of college. In spite of this, she took some risks and became a candidate for mayor in Madison, a prodigious fundraiser and a community activist for causes and candidates she believes in. Along the way, she discovered that only in the United States of America could this happen. This book is to re-kindle the hope that is in all of us. Mary and her husband Hans, live in Madison, Wisconsin.