Swing Your Sword: Leading the Charge in Football and Life (Paperback) 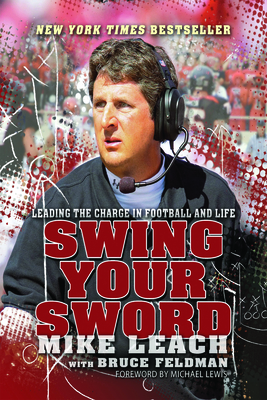 Newly-minted Mississippi State head coach Mike Leach tells his captivating story--from rural Wyoming to law school to the upper echelons of the SEC. SWING YOUR SWORD is the first ever book by one of the most fascinating and successful coaches in sports today. A maverick who took an unlikely path to coaching through law school, Mike Leach talks about his unorthodox approach to coaching and the choices that have brought him success throughout his career. A lover of the game who started creating formations and drawing his own plays as a kid, Leach took his Texas Tech Red Raiders to numerous bowl games, achieving the #2 slot in national rankings and being voted 2008 Coach of the Year before being unceremoniously fired at the end of the 2009 season. The scandalous nature of his dismissal created a media frenzy and began a personal battle between Leach and his accusers that remains unresolved.

Mike Leach: In 2000, Mike Leach took over a Texas Tech program that had one of the worst graduation rates in all of major college football. Almost a decade later, as Leach has guided Tech to unprecedented on-field success, he has also led a program that now has the highest graduation rate of any public university in the Top 25. In 2008, Leach was named the College Coach of the Year by the Maxwell Football Club after leading Texas Tech to its most successful regular season in school history. Tech rose to #2 in the national polls, higher than the school had ever been and the Red Raiders led the country in passing for the sixth time in Leach s nine seasons coaching in Lubbock. Late in 2009, Leach was fired following accusations of mistreatment in the case of one of Leach s injured players. He is native of Cody, Wyoming and graduated from Brigham Young University. He earned his J.D. from Pepperdine Law School in 1986. Leach and his wife Sharon have four children.