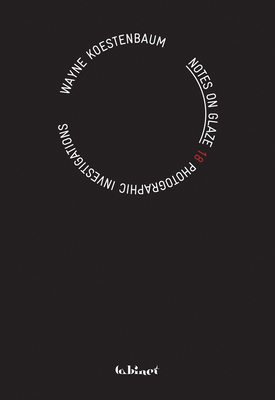 In the spring of 2010, the Brooklyn-based quarterly magazine Cabinet invited poet and cultural critic Wayne Koestenbaum to begin writing a regular column. Entitled Legend, the column had a highly unusual premise. Every three months, the editors of the magazine would ask Koestenbaum to write one or more extended captions for a single photograph with which they had provided him; drawn from obscure vernacular, commercial and scientific sources, all of the images were unfamiliar to the author. After 18 installments, Koestenbaum concluded his column in the winter of 2015. Notes on Glaze, featuring an introductory essay by the author, collects all the Legend columns, as well as their accompanying photographs. Refusing the distancing language of critical disinterest, Koestenbaum's columns always locate the author in intimate proximity to the subjects portrayed in the photographs and to the impossibly variegated cast of characters--ranging from Debbie Reynolds to Duccio, the Dalai Lama to Barbra Streisand; from Hegel to Pee-wee Herman, and Emily Dickinson to Cicciolina--that pass through these texts.
Wayne Koestenbaum (born 1958), a Distinguished Professor of English at the CUNY Graduate Center, has published 17 books of poetry, criticism and fiction, including My 1980s & Other Essays (Farrar, Straus and Giroux, 2013), Blue Stranger with Mosaic Background (Turtle Point Press, 2012) and The Anatomy of Harpo Marx (University of California Press, 2012). His most recent book of poetry, The Pink Trance Notebooks, was published in 2015 by Nightboat Books.