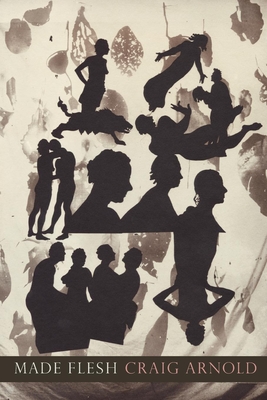 By Craig Arnold
Email or call for price
Special Order

"Throughout Made Flesh, one of the most powerful poetry books this year, Arnold gets at both the contradictions and timelessness of love." --Time Out New York

"The readers delighted with (Arnold's) first book (Shells) will be differently enchanted with these. They contain a wealth of contemplation as well as observation and experience. Their unpunctuated free style carries the reader into the poems, piling up events and details in a breathless rush....The poems of Made Flesh are unforgettable, and it is tragic that readers will have no new books from Craig Arnold."--Magill Book Reviews

A girl wakes up to find out just how completely her lover has possessed her. A couple realizes they've been trapped inside an ancient myth. A traveler glances out through a train window and catches the dim reflection of another world.

This is the world of Made Flesh, the long-awaited second book by Craig Arnold, a finalist for the Utah Book Award and the High Plains book award. Made Flesh delineates a new mythology of what it means to be in the body. Marrying narrative precision to lyric ecstasy, the archaic to the avant-garde, these poems celebrate the fragility of our very selves and "the joy of self-forgetting," the acts of surrender that loves asks of us. Fierce, exuberant, and erotic, they invite the reader to share a rare and startling vision: how, if we would only permit ourselves to be drawn out of our mental privacies, out to the very surface of our skin, we might admit the beauty of being for a moment in the world, and with each other.

Craig Arnold is the author of Shells, a Yale Series of Younger Poets selection chosen by W.S. Merwin. He taught at the University of Wyoming in Laramie. In late April 2009, Craig Arnold went missing on the Japanese island of Kuchinoerabu-jima, where he was working on a book about volcanoes as part of a Creative Artists' Exchange Fellowship from the Japan-United States Friendship Commission. He was forty-one years old.

Craig Arnold teaches and directs the Visiting Writers Series at the University of Wyoming MFA Program. His first book Shells won the 1998 Yale Series of Younger Poets award.He has appeared in three volumes of Best American Poetry and was awarded the Rome Prize, an NEA fellowship, the Hodder Fellowship and the Amy Lowell Poetry Traveling Scolarship.