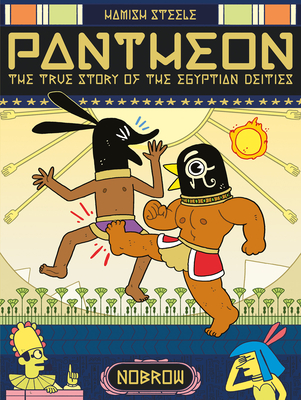 By Hamish Steele
Email or call for price
Special Order

The most important myth in Ancient Egypt is faithfully retold in glorious color! Horus, son of Isis, vows bloody revenge on his Uncle Set for the murder and usurpation of his Pharaoh father. Based on elements from various versions of the famous Osiris myth, Hamish Steele has resurrected this fantastic story in all its symbolic and humorous glory.
Pantheon contains: incest, decapitation, suspicious salad, fighting hippos, flying cows, a boat race, resurrections, lots of scorpions and a golden willy.

Hamish Steele is a freelance animation director and illustrator from London. He graduated from Kingston University with First Class Honors in 2013 and since then has worked for the BBC, Frederator Studios, Blink!Ink, BOOM! Studios, Random House and Nickelodeon and Big Finish. Pantheon is his first graphic novel.

“Hamish Steele is a hell of a cartoonist […] I love this book with every part of my heart. It is joyous, entertaining, and as somebody who’s written stories featuring the Egyptian myths—I didn’t do it like this, and I kind of wish I did.”
—Kieron Gillen, creator of The Wicked + the Divine

"History has rarely been more entertaining than in Steele’s account of Ancient Egypt’s creation myth and the epic feud between divine brothers Osiris and Set. Cobbling together a cohesive origin story is no mean feat, due to regional variations within the kingdom, but Steele not only pulls this off, he shakes loose the dust accumulated over the myth’s years spent in academia. […] Taking a bawdy, irreverent tone, Steele lays out the gods’ antics with the wit and humor of a Simpsons episode (though graphic depictions of sex make this better suited to the adult section), and the brightly colored artwork bears a hint of that look, as well. […] Exuberantly absurd and satisfyingly self-aware, Egyptian mythology gets the royal treatment here."
—Booklist, STARRED REVIEW

"[Pantheon] adds up to a touching, insightful examination of the purpose of religious belief. […] makes the ancient stories feel relevant and alive."
—Publisher’s Weekly

"Hamish Steele’s Pantheon: The True Story Of The Egyptian Deities spotlights just how strange mythology can be, adapting ancient Egyptian folklore in all of its absurd, grotesque glory. […] Combining a Matt Groening-esque aesthetic with the anachronistic literary jokes of Kate Beaton and the gross-out comedy of the Farrelly brothers, Steele creates a highly entertaining, but still informative, interpretation of these myths."
—The AV Club

"Packed with all the unimaginable violence and sexual impropriety one might expect from mythology, this tale could have been a brutal, heavy read in lesser hands than those of newcomer Steele, whose lively, irreverent sense of humor makes even matricidal duels to the death and multiple poisonings seem like good fun. Steele manages to include dirty jokes and heavy snark while still making compelling points and raising insightful questions about the role of faith in the development of ancient civilizations and in daily life without ever taking himself too seriously. This elevates the title from an enjoyable to essential read. With a visual style reminiscent of cartoons such as Adventure Time and Steven Universe but decidedly more adult content, this volume should easily find an enthusiastic fan base."
—Library Journal

"Steele takes the ancient source material and refreshes it with modern irreverence. His cartoons are colorful and lively, and his dialogue is ironic and hilarious without being bombastic. [...] Pantheon never takes itself too seriously, which makes its presentation of mythology all the more enjoyable. Readers may find Steele provides some genuine education in the process."
—Shelf Awareness

"Hilarious as it is enlightening about all things ancient and Egyptian. Providing the perfect antidote to dry and dusty historical tomes this is a thoroughly raucous read that’s packed with intrigue, incest and internal power struggles between anthropomorphic anti-heroes. Like a sandier and more surreal Simpsons this brilliant book is just the ticket if you fancy dusting up on your Egyptian mythology with plenty of ha ha thrown in with your Ra."
—Proper Mag

"Steele’s attitude is remarkably honest and direct in this book, while allowing for humor, adventure, and snark, as he approaches the family of gods who we usually associate with hushed grandeur among the tombs in the Valley of the Kings in Egypt. […]What Steele produces in Pantheon is the ultimate mythological approach in an "Honest Trailer" format—bouncy, lively, remarkable educative, and at times, laugh out loud disgusting. […] If you want to know more about Egyptian mythology, or even just want see what a modern cartoonist gets up to with ancient material, this is the book for you."
—Comicon.com