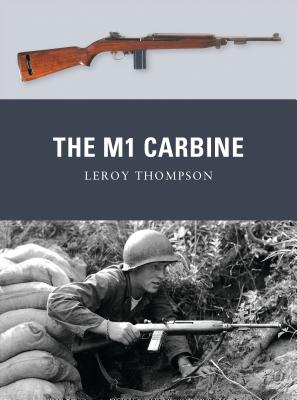 This is book number 13 in the Weapon series.

The M1 Carbine was produced in more numbers than any other US small arm in World War II (1939-1945). In 1938 the US Chief of Infantry requested that the Ordnance Department develop a carbine or light rifle to be used by service and support troops, artillerymen, machinegun crews, tankers, mortar crews and other troops not needing the power of the M1 Garand rifle. The development of this new weapon was given an added impetus by Germany's successful use of airborne and glider troops early on in World War II. This caused a fear amongst US officers that troops normally considered "behind the lines" personnel might have to fight elite German troops and would therefore require a more effective weapon than their standard pistols. The resulting M1 Carbine was a not a shortened version of the standard service rifle but instead a brand-new design chambering a new cartridge. This new weapon would see service in every theater and with all US service arms as well as American and Allied special units including the OSS, Merrill's Marauders, the SAS and the SBS. Eventually numerous manufacturers would combine to produce over six million M1 Carbines before the end of the war. This new title provides an in-depth analysis on this crucial, trailblazing weapon.

“Author Leroy Thompson tells us the story of the M1 Carbine from its inception to today's use... It all makes for another fine book and if you are interested in weapons, then this book would make a fine addition to your library.” —Scott Van Aken, Modeling Madness