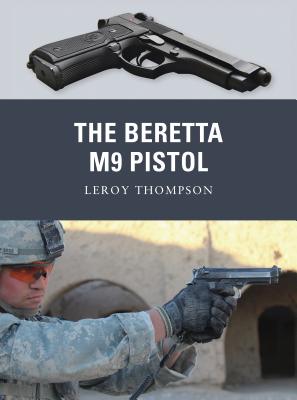 In 1990 the Beretta M9 replaced the venerable Colt 1911 as the main pistol of choice for the US Army. At the time the decision was controversial particularly because it was perceived that a smaller caliber weapon such as the Beretta would lack the necessary stopping power and range in comparison to the .45 caliber Colt. The situation was not helped by the rumour that the adoption of this Italian designed pistol was in exchange for the creation of US missile bases within Italy. Nonetheless, the Beretta, although not a perfect pistol, has since proved many of its distractors wrong with widespread use in Iraq and Afghanistan. Written by a leading pistol expert who currently trains US Special Forces in the use of this weapon, this book is an honest appraisal of the successes and failings of the Beretta design. The volume traces the Beretta designs, which preceded the M9 as well as its use on the battlefield, including the impact it has had on close combat training due to the larger magazine capacity. It also details the adoption of the Beretta by US law enforcement agencies and the impact this has had. This is a fascinating history of a classic pistol and its future use.