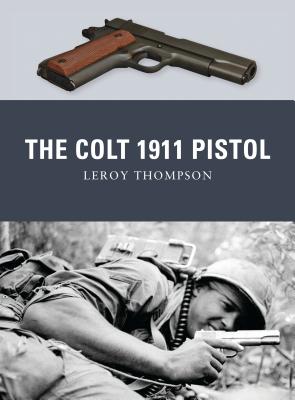 This is book number 9 in the Weapon series.

First used in combat during the Punitive Expedition into Mexico and then extensively during both World War I (1914-1918) and World War II (1939-1945), the Colt Government Model (1911) pistol remained the standard issue handgun in the US armed forces for nearly 80 years and has continued in service with some units to this day. In fact, the M1911 has seen a resurgence among US Special Operations units, as US Marine MARSOC and MEUSOC personnel are issued current generation 1911-type pistols.

In addition, the pistol has seen service with famous law enforcement agencies such as the Shanghai Municipal Police, LAPD Swat and Texas Rangers. Nearly a century after its introduction, the M1911 Pistol remains a popular design and is now produced by virtually every major firearms manufacturer doing business in the USA.

In this new volume, handgun expert Leroy Thompson sheds new light on the development, history and use of this revolutionary handgun, complete with specially-commissioned artwork depicting the firing process and cutaway profile of the gun, as well as its use in various theaters of war.

“Author Leroy Thompson tells us the story of the Model 1911 from its inception to today's use. This includes all of the different variations and improvements made to the gun in the last 100 years. It is truly staggering the number of types made and the huge number of places and companies who made these pistols. It all makes for another superb book and if you are interested in weapons, then this book is very much a must have. Highly recommended.” —Scott Van Aken, Modeling Madness