Out of This World: Historic Milestones in Nasa's Human Space Flight (Hardcover) 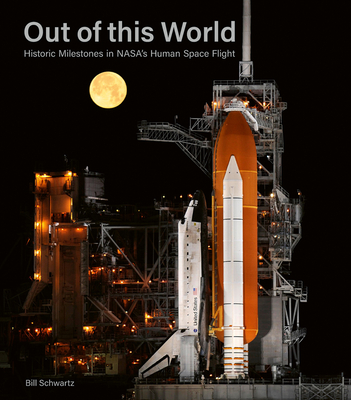 - A stunning coffee table book of historically significant NASA photos- Amazing photographs complemented by quotes and stories from noted personalities at NASA- A chronological journey through NASA's history, from Apollo to the James Webb Telescope- Awe-inspiring, inspirational and motivational, a perfect gift and a must for your library- Quotes from astronauts Commander James Lovell and John Glenn, as well as John F Kennedy, Ralph Waldo Emerson and many more- Short video for the title here"The history of space exploration is best presented in this book of NASA photographs, whose images are universally inspirational." - Commander James Lovell, Apollo 13 NASA has worked at the forefront of space exploration and research since 1958. Their devotion to furthering our understanding of what lies beyond our atmosphere has seen 12 humans walk on the surface of the moon, helped form the International Space Station, and placed numerous rovers on Mars. Voyager 1, launched by NASA on 5 September 1977, is the furthest manmade object from earth, having left our solar system entirely - and the agency's plans for the future are equally inspiring.This book celebrates NASA throughout the years, from its inception to its 60th anniversary in 2018, and beyond. A visual tour-de-force, the book collects high resolution NASA photos of historic significance; from rarely seen photos and the words of President John F. Kennedy commanding the space race, to the many triumphs and tragedies of the Apollo Missions, moon landings, the International Space Station, space shuttles, journeys to Mars and explorations of our galaxy's outer reaches. These breathtaking images are complemented by heartfelt words of hopes and imagination for the future, encouraging readers to admire their world from a different perspective. NASA: the Greatest Milestones is a stunning 300 page book.

For over 25 years, Bill Schwartz has been involved in the production, distribution, licensing and branding of high-profile entertainment content on a global basis. Along with licensing or acquiring thousands of hours of feature films, television series and documentaries, Bill has created and produced 20 broadcast documentaries, including Terror On The Titanic, Howard Hughes: The Real Aviator and Valkyrie: The Plot To Kill Hitler. Of all of Bill's productions, his passion project was Journey to Mars, a documentary about NASA's Viking Pathfinder, the first vehicle to explore the surface of Mars. The story, the trust and the investment required gave a true insight to the drama and courage of the people and technology at NASA. Thus, when an opportunity presented itself to create a book of inspiring photographs about NASA milestones, it was an offer too good to pass up.