We Fight Fascists: The 43 Group and Their Forgotten Battle for Post War Britain (Paperback) 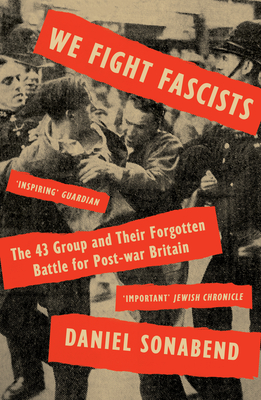 Returning to civilian life, at the close of the Second World War, a group of Jewish veterans discovered that, for all their effort and sacrifice, their fight was not yet done. Creeping back onto the streets were Britain’s homegrown fascists, directed from the shadows by Sir Oswald Mosley. Horrified that the authorities refused to act, forty-three Jewish exservicemen and women resolved to take matters into their own hands. In 1946, they founded the 43 Group and let it be known that they were willing to stop the far-right resurgence by any means necessary.

Their numbers quickly swelled. Joining the battlehardened ex-servicemen in smashing up fascist meetings were younger Jews, including hairdresser Vidal Sassoon, and gentiles as well, some of whom volunteered to infiltrate fascist organisations. The Group published its own newspaper, conducted covert operations, and was able to muster a powerful force of hundreds of fighters who quickly turned fascist street meetings into mass brawls. The struggle peaked in the summer of 1947 with the Battle of Ridley Road, where thousands descended on the Hackney market to participate in weekly riots.

The history of the 43 Group is not just a gripping story of a forgotten moment in Britain’s post-war history; it is also a timely lesson in how to confront fascism—and how to win.

Daniel Sonabend is a writer and historian who lives in London. He studied for his MPhil in Political Thought and Intellectual History at Cambridge University. For the past six years he has been researching the 43 Group and working to share its story. This is his first book.

“A great reminder of a post-war resistance to fascism amongst Jewish Londoners. It’s a little-known story as it tends to get hidden behind the pre-war appearance of Oswald Mosley and the British Union of Fascists but, as we read here, Mosley wasn’t finished with his Jew-baiting. My own grandparents lived two hundred yards from the scene of action of most of this book and reading it brought it all to life for me.”
—Michael Rosen, author of So They Call You Pisher!

“Brilliant, compelling and very timely. This is the sort of history we should all know about, especially in these troubled times, but were never taught at school.”
—Keith Lowe, author of The Fear and the Freedom

“Inspiring … the fundamental questions it raises have yet to disappear from our political landscape.”
—Daniel Trilling, Guardian

“A new, comprehensive history of the group.”
—Economist

“Sonabend’s debut brilliantly chronicles the 43 Group’s lightning-fast progress from a homespun organization with a handful of Jewish ex-servicemen … to a surprisingly sophisticated one with up to 2,000 members and intelligence and surveillance branches.”
—Haaretz

“Sonabend combines academic rigour with an easy, readable style, all of which helps to throw into sharp relief the difficult questions the story raises.”
—New Statesman

“Sonabend delights in these madcap tales of the 43 Group’s violent confrontations with their fascist opponents and the ways the members managed to elude the (sometimes-fascist-sympathizing) police.”
—Mari Cohen, Jewish Currents

“This important book is not simply a trip down memory lane, but a warning from history. It should be mandatory for those who do not see themselves as bystanders.”
—Jewish Chronicle

“Thrilling … full of unforgettable characters, clandestine activities, deception, surveillance and more than a few full-blooded street brawls … A must read for all antifascists.”
—Hope Not Hate

“Not for the politically faint-hearted, have a milk shake handy whilst reading.”
—Counterfire

“Sonabend rescues the ‘43 Group’ from … obscurity … a victory.”
—Chartist

“Readable and well-researched … a timely reminder that militant anti-fascism not only has deep historical roots but can also be an effective bulwark against the extreme right.”
—Patterns of Prejudice Journal