The Invention of Terrorism in Europe, Russia, and the United States (Paperback) 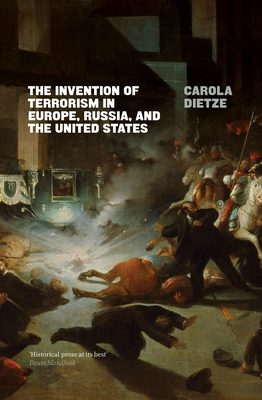 Terrorism's roots in Western Europe and the USA

This book examines key cases of terrorist violence to show that the invention of terrorism was linked to the birth of modernity in Europe, Russia and the United States, rather than to Tsarist despotism in 19th century Russia or to Islam sects in Medieval Persia. Combining a highly readable historical narrative with analysis of larger issues in social and political history, the author argues that the dissemination of news about terrorist violence was at the core of a strategy that aimed for political impact on rulers as well as the general public. Dietze's lucid account also reveals how the spread of knowledge about terrorist acts was, from the outset, a transatlantic process. Two incidents form the book's centerpiece. The first is the failed attempt to assassinate French Emperor Napoléon III by Felice Orsini in 1858, in an act intended to achieve Italian unity and democracy.

The second case study offers a new reading of John Brown's raid on the arsenal at Harpers Ferry in 1859, as a decisive moment in the abolitionist struggle and occurrences leading to the American Civil War. Three further examples from Germany, Russia, and the US are scrutinized to trace the development of the tactic by first imitators. With their acts of violence, the "invention" of terrorism was completed.

Terrorism has existed as a tactic since then and has essentially only been adapted through the use of new technologies and methods.

Carola Dietze is Professor for Modern History (Chair) at Friedrich Schiller University Jena since 2017. She was previously a visiting professor for modern and contemporary history at Ludwig Maximilians University Munich, a German Research Association Heisenberg fellow and a fellow at the Netherlands Institute for Advanced Study in the Humanities and Social Sciences, Wassenaar.

“Carola Dietze is a fascinating storyteller. This is historical prose at its best. Despite the wealth of footnotes and source references, this book is a real pageturner.”
—Paul Stänner, Deutschlandfunk

“The story of tragic heroes, conspiracies, and how they resonant in the media that Dietze unfolds to elucidate her argument is not only enlightening—it is also entertaining for readers.”
—Lea Haller, Neue Zürcher Zeitung

“This book may well revolutionize our understanding of the origins of terrorism in the 19th century. In highly original fashion, it closely links together the actions of terrorists in France, Russia, and the United States and shows how between 1858 and 1866 two key terrorists influenced three copycats who altogether ignited the explosion of modern terrorism. The depth of Dietze’s research, drawing upon archives not only in Europe and the United States, but also in Russia, is staggering. A must read for anyone interested in the history of terrorism.”
—Richard Bach Jensen, Louisiana Scholars’ College at Northwestern State University, author of The Battle Against Anarchist Terrorism