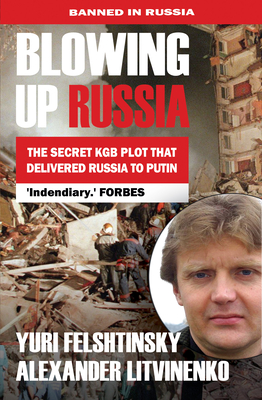 By Yuri Felshtinsky, Alexander Litvinenko
$17.95
This item is out of stock with our warehouse. Some recently published books may be in stock @ Room. Email to check.

New introduction by Yuri Felshtinsky. Blowing up Russia trace the extraordinary story behind the fake Islamist attacks on Moscow that led to marshal law and triggered Russia's invasion of Chechnya. Based on the steady stream of official statements and Litvinenko's insider knowledge, this exceptional book shows how there were no Islamist attacks at all. Rather all the exercises were carefully planned by the FSB itself to look as if Russia was under attack. The ultimate aim? To get Vladimir Putin, the FSB's former Head, elected as President.

Yuri Felshtinsky is an expert on Russia's secret service and was a Hoover Institute Fellow at Stanford University. He was one of the last people to speak to Litvinenko hours before Litvinenko's murder ordered by Vladimir Putin with Polonium 210. Alexander Litvinenko was a Colonel in the FSB and served directly under Putin.