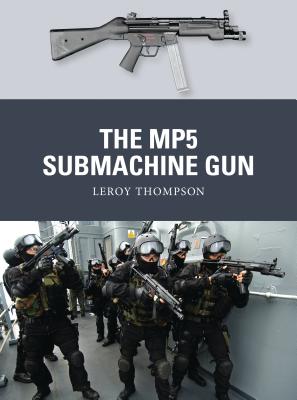 By Leroy Thompson, Johnny Shumate (Illustrator), Alan Gilliland (Illustrator)
$22.00
This item is out of stock with our warehouse. Some recently published books may be in stock @ Room. Email to check.

This is book number 35 in the Weapon series.

Since the mid-1960s the Heckler & Koch MP5 has become the most widely used submachine gun in the world, especially among counterterrorist and special-operations units. Lightweight and offering a blistering rate of fire of 900 rounds per minute in some versions, the MP5 quickly earned a reputation for accuracy due to its fixed yet free-floating hammer-forged barrel and close-bolt operating system. Its sights, which consist of a front hooded post and rear rotary drum, aid in accuracy as well; at the time of its introduction the MP5's sights were superior to those of most other SMGs available. The MP5's accuracy is one reason it has seen such success among counterterrorist units, for whom shot placement is absolutely critical.

Developed as part of a series of weapons owing design details to the Heckler & Koch (HK) G3 battle rifle, the MP5 employs a roller-delayed blowback action, which can easily handle the 9x19mm Parabellum pistol cartridge. As with other HK weapons, the MP5 employs a fluted chamber which allows gases to bleed rearward thus preventing the case from expanding fully inside the chamber, thus enhancing reliability. Although the MP5 normally comes with a flash suppressor, it is designed so that various others accessories including blank training device, grenade launcher, suppressor, etc. may be mounted. As with other weapons based on the G3, the receiver of the MP5 incorporates notches that allow the mounting of optical sights.

The two basic original versions of the MP5 are the MP5A2 with polymer fixed stock and the MP5A3 with collapsible steel stock. These remain two of the most widely used versions today. The popularity of the MP5 with special military and law-enforcement operators has led to the introduction of special versions such as the MP5N adopted by the US Navy SEALs and others. Also, to suit the needs of special operations personnel the MP5SD suppressed version was produced. To meet the needs of close-protection teams, air marshals, and special operators, the compact MP5K was developed. Variants with other features and in other calibers have been introduced as there has been sufficient demand for them among world users. To meet the needs of US agencies which do not use 9x19mm pistols, other calibers of MP5 have been developed. For the FBI, the 10mm MP5 was built, while other agencies that use the .40 Smith & Wesson cartridge in their weapons asked for and got .40 S&W HK MP5s.

One of the first well-known users of the MP5 was Germany's GSG 9 counterterrorist unit. When training with GSG 9, Britain's Special Air Service was impressed with the MP5 and adopted it for their Special Projects Team. Its use by these two high-profile units has helped popularize the MP5 with military and police special-operations units across the world. Reportedly, the first UK police adoption was by the London Metropolitan Police's Diplomatic Protection Unit, who adopted the MP5K for use when guarding certain high-profile dignitaries. Versions of the MP5 are widely used among US police agencies with some deploying them in their vehicles. The MP5 has proved so popular with military and police agencies that eventually more than 80 countries have adopted it, from Albania to Zambia.

The influence of the MP5 is both technical and tactical. Prior to the development of the MP5, the submachine gun was not normally considered a precision weapon, but the MP5 is. This has allowed the creation of an entire system based on the MP5 for use in hostage rescue or other precise shooting situations. The MP5's influence is also in the weapon designed by HK as its replacement - the Universal Machine Pistol (UMP) - though the MP5 remains in production as well as the UMP.