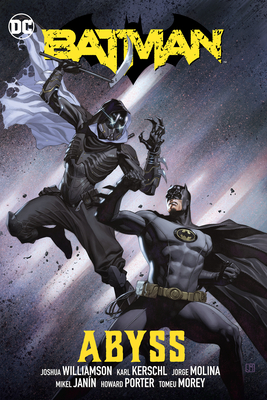 The Dark Knight will leave Gotham and enter the Abyss! While unraveling a mystery that involves his closest allies, Batman will come to face-to-face with a new villain who turns the darkness into his greatest threat.

As Gotham celebrates surviving Fear State, Batman retreats alone into the darkness. But when he learns of a mystery involving Batman Inc., it forces the Caped Crusader to leave Gotham for a brand-new adventure! He’ll discover Batman Inc.’s mysterious new benefactor and clash with a brand-new foe who turns Batman’s greatest weapon against him. Will Batman be able to save his closest allies or find himself lost in the dark against the Abyss?

Joshua Williamson lives in Portland, Oregon. His career as a comics writer kicked off in 2007, and since then he has done a number of books for Shadowline, Image, Desperado Publishing, Kick Start, and DC Comics. He has written the Uncharted limited series based on the bestselling video game, Voodoo, and Marvel's Illuminati and Red Skull. He is currently writing The Flash and Batman/Superman for DC Comics.