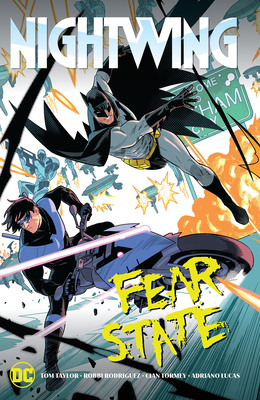 By Tom Taylor, Bruno Redondo (Illustrator)
$24.99
This item is out of stock with our warehouse. Some recently published books may be in stock @ Room. Email to check.

The New York Times bestselling Injustice team of Tom Taylor and Bruno Redondo continue their acclaimed run on Nightwing with this second volume that ties-in with the BATMAN: FEAR STATE event!


When the Bat-Family receives misleading information and incorrect directions from Oracle, ones Barbara Gordon didn’t send herself, they realize Oracle’s system has been hacked! But who is powerful enough to break into Oracle’s own super-secure network? And what personal information is now at risk? Not only that, this mysterious Anti-Oracle is taking advantage of Gotham City’s state of fear and has bombarded the city with falsities, spreading even more fear. With the Bat-Team’s comms unreliable, Nightwing heads to Gotham to find the source of Anti-Oracle’s transmissions. Batgirl and Nightwing accidentally get hit with something that reveals their deepest fears...and it involves each other.