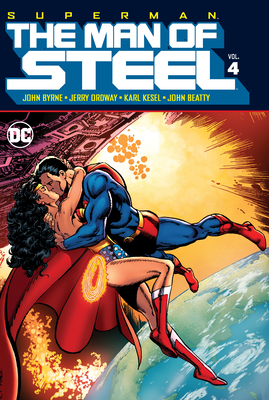 A bold new reimagining of the life and times of the Man of Steel, crafted by legendary comics writer and artist John Byrne—the history of the Last Son of Krypton would never be the same!

In this collection, meet Supergirl and learn who she is and what secrets her powers hold! And Superman and the Doom Patrol must find a way to protect Smallville! There's even a visit to Krypton! This volume contains Superman #16-22; Adventures of Superman #439-444; Action Comics #598-600; Superman Annual #2.

Born in England and raised in Canada, John Byrne discovered superheroes through The Adventures of Superman on television. After studying at the Alberta College of Art and Design, he broke into comics first with Skywald and then at Charlton, where he created the character Rog-2000. Following his tenure at Charlton, Byrne moved to Marvel, where his acclaimed runs on The Uncanny X-Men and The Fantastic Four soon made him one of the most popular artists in the industry. In 1986 he came to DC to revamp Superman from the ground up, and since then he has gone on to draw and/or write every major character at both DC and Marvel.

Jerry Ordway is a writer and artist whose work has spanned over three decades and every major comic book publisher. He is best known for his work on Superman, Action Comics, Wonder Woman, The Power of SHAZAM!, Crisis On Infinite Earths, and Infinite Crisis, amongst dozens of titles.