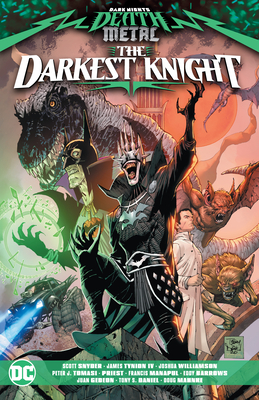 By Various, Various (Illustrator)
$19.99
This item is out of stock with our warehouse. Some recently published books may be in stock @ Room. Email to check.

THE ARMY OF THE BATMAN WHO LAUGHS RISES AND EARTH DOESN’T STAND A CHANCE!


The DC Universe has become engulfed by the Dark Multiverse, where demons dwell and reality is overrun by monstrous versions of the Dark Knight, all ruled by the Batman Who Laughs. As Wonder Woman, Superman, Batman, and other heroes fight to survive in this strange new landscape, one cloaked figure has been observing from the sidelines, creating a guidebook to this new world and its evil leaders in the hope of forming a plan of justice…and penance. Meanwhile, the heroes have split up on separate missions to take back the Earth. Superman, Batman, and Wonder Woman launch a head-on assault on Castle Bat; the Flashes are in a race to the death with the Darkest Knight; and the Green Lanterns try to save the heroes of the dying Multiverse!