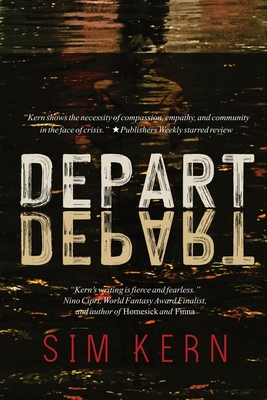 When an unprecedented hurricane devastates the city of Houston, Noah Mishner finds shelter in the Dallas Mavericks' basketball arena. Though he finds community among other queer refugees, Noah fears his trans and Jewish identities put him at risk with certain "capital-T" Texans. His fears take form when he starts seeing visions of his great-grandfather Abe, who fled Nazi Germany as a boy. As the climate crisis intensifies and conditions in the shelter deteriorate, Abe's ghost grows more powerful. Ultimately, Noah must decide whether he can trust his ancestor ⁠- and whether he's willing to sacrifice his identity and community in order to survive.

Depart, Depart grapples with intersections of social justice and climate change, asking readers to consider how they'll react when the world changes in an instant. Who will we turn to? What will we take with us, and what will we have to leave behind? In our rapidly changing world, these are questions we grapple with. Focusing on finding and supporting community after disaster, Depart, Depart is a story for these uncertain times.