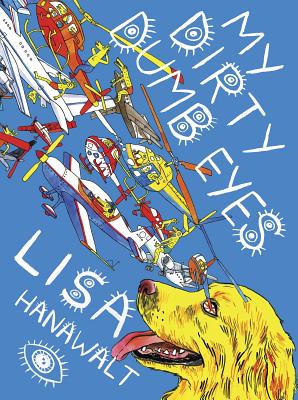 By Lisa Hanawalt
Email or call for price
Backordered

BEST OF THE YEAR NODS FROM AMAZON, THE WASHINGTON POST, AND USA TODAY'S POP CANDY BLOG!

"For years I've encountered Lisa Hanawalt's comics and illustrations piecemeal -- in various magazines and periodicals. They're always a pleasant jolt. Now, they've been assembled into one thick, blazing bludgeon. I envy you getting walloped by them all for the first time. This is a Hanawalt assault. Succumb."–Patton Oswalt

"Hanawalt's My Dirty Dumb Eyes is a fantastically vivid and whimsical playground, offering page after page of absurdity, humor, and charm. The artwork is stunning and the jokes are surprising and fresh. This book is a rare and wonderful invitation inside the surreal world of Hanawalt."--Kristen Schaal

"Lisa Hanawalt is as gifted of an artist as she is a hilarious writer, which is completely upsetting and unfair considering how untalented most people in this stupid world are. Her comics are brilliantly funny, gloriously weird, and visually stunning. I worship the chair she farts on."--Julie Klausner

My Dirty Dumb Eyes introduces Lisa Hanawalt as a first-rank cartoonist/humorist/stalker for an audience that likes its humor idiosyncratic, at times anthropomorphic or scatological, often uncomfortable, and always sharp witted. Her world vision is intricately rendered in a full spectrum of color, unapologetically gorgeous and intensely bizarre. With movie reviews, tips for her readers, laugh-out-loud lists and short pieces such as "Rumors I've Heard About Anna Wintour," and "The Secret Lives of Chefs," Hanawalt's comedy shines, making the quotidian silly and surreal, flatulent and facetious.
Hanawalt's comics have appeared in the Hairpin, VanityFair.com, the New York Times, and the Believer. She lives in Brooklyn with a dog and a comedian.

From Other People in 2008, establishing her comic-making style of funny illustrated lists and anthropomorphized animals. Her first collection with D+Q, My Dirty Dumb Eyes, was published in 2013 and met with widespread critical acclaim.

Lisa Hanawalt draws illustrations and funnies for places like The New York Times, Hazlitt, McSweeneys, Chronicle Books, and Vanity Fair and she writes and draws a quarterly food column for Lucky Peach, for which she won a James Beard Award in 2014. She currently lives in Los Angeles, CA, and is the character designer for and co-producer of the Netflix original series, Bojack Horseman.

“My Dirty Dumb Eyes is a zero-attention-span assemblage of surreal one-page drawings, clusters of gag cartoons ("How We Can Tell Martha Stewart's Drunk"), short comics stories, illustrated movie reviews and garish stoner tableaus. They add up to a wildly entertaining portfolio from an artist with a masterly painting and drawing hand, obsessions with animals and genitals, and a very weird, intentionally dopey sense of humor.” —New York Times

“Read this book because it's funny, because it's beautiful, and because it will nourish the inner weirdo you've been keeping under wraps for too long.” —NPR

“With its leitmotif blend of whimsy, wistfulness, and a touch of scatology, [My Dirty Dumb Eyes] is funny and life-of-the-party loud.” —The Paris Review

“My Dirty Dumb Eyes... is exactly as weird, obscene, hilarious, and gross as you might expect... It is also absurdly smart and sharp.” —Slate