Road to Wapatomica: A modern search for the Old Northwest (Hardcover) 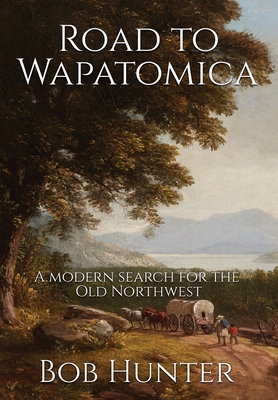 Looking for history on our streets and street corners, in our parks and even in our backyards, Bob Hunter sets out on a journey across the Midwest in search of memorable moments from the days of the Old Northwest. Forts, trails, trading posts, Native American villages, battlefields, gravesites and landmarks, both remembered and forgotten, are all on his radar, as are places where acts of heroism, murder, butchery and massacre took place. He tackles the job with humor, curiosity and skepticism, tries to separate legend from fact, and introduces readers to the people he encounters along the way.

How the famous Fallen Timbers battlefield was found a quarter-mile from the spot where historians thought it was for two centuries.

How and where renowned Ottawa chief Pontiac was murdered and how his burial place has long been a topic of dispute.

How the most important early town and eventual capital in the Illinois country was swallowed up when the Mississippi River changed its course.

How the Iroquois got their name on a point in northern Michigan, hundreds of miles away from their traditional hunting ground.

How a poor translation of French written by a Jesuit missionary created the erroneous impression that Jean Nicolet was searching for a route to China when he landed in Green Bay, a mistake that became part of a well-known painting.

How the popular Indiana home of a future president, once site of negotiations with famous Shawnee leader Tecumseh, was nearly torn down to serve the purposes of a local water company.

How Bloody Run, a creek that took its name from a famous battle between British soldiers and Pontiac's forces, is now above ground only in Detroit's Elmwood Cemetery.

How Father Jacques Marquette received most of the credit for a historic journey over the Fox-Wisconsin portage to the Mississippi River, even though Louis Joliet was the expedition's leader.

How a famous early Cincinnati resident was responsible for historians misidentifying the location of Fort Washington for 150 years.

How early French explorers once trudged through mud and leeches on a portage that stood not far from Chicago's Midway airport.

Readers can simply enjoy reading of the author's experiences or use this historical travelogue as a guide to exploration of these places at their own pace. Regardless of their preference, they are guaranteed to take a series of rewarding trips back in time.