One Day Stronger: How One Union Local Saved a Mill and Changed an Industry--and What It Means for American Manufacturing (Paperback) 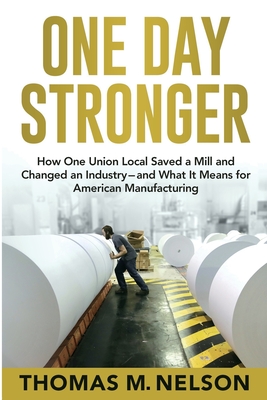 In August, 2017, the death knell sounded for yet another troubled American manufacturer: Appleton Coated, a historic mill in Wisconsin's historic paper valley that had been the community's economic mainstay for 128 years. The mill was sold to an industrial scrapper; hundreds of jobs were threatened, and a way of life hung in the balance.

But then the unlikely happened.

The mill's union local and one county official leveraged an obscure legal strategy to stop the selloff. They did so in the face of widespread indifference from cynical politicians, including the state's Republican governor and legislature, who were hell-bent on landing a plant to be built by Foxconn, a controversial foreign electronics manufacturer-even at the cost of over $3 billion in state subsidies.

Against all odds, the people won. Now the county official who joined in their fight, Outagamie County Executive Tom Nelson, tells the story behind this remarkable turnaround. One Day Stronger is an inspiring saga of how a determined group of millworkers and other community-minded people triumphed over apathy, corporate avarice, and powerful political forces.

Today, the Appleton Coated mill is alive and well, and the Foxconn deal has cratered. But other manufacturers across the country face threats similar to the one that almost destroyed Appleton Coated. Author Nelson explains the crucial role that labor unions have played in building America's middle class by creating and sustaining good-paying jobs, fostering prosperous communities, and promoting social solidarity. More important, he shows how labor, working in common cause with business and local government, can restore the American dream.

In a world where corporate greed and financial engineering have crushed the dreams of countless Americans, One Day Stronger offers a road map for fighting back-and winning.