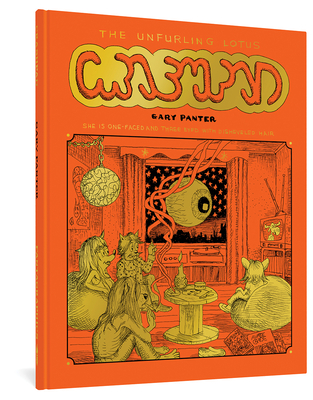 This fine art monograph/faux underground comic facsimile is a psychedelic trip through the hippie movement.

In 2017, Gary Panter created an art installation, Hippie Trip, inspired by his first visit to a head shop in 1968. It expanded his mind to the possibilities of psychedelic art and music, analog crafts and drug culture. Crashpad is an extension of that installation and a riff on underground comics creators such as Zap's R. Crumb, Victor Moscoso, Robert Williams, and other icons of that era. An art object itself, it will be reproduced as both a deluxe, oversized hardcover reproducing Panter's pages at full size on heavy art paper, as full-color facsimiles of the originals. In addition, Crashpad will be printed as an old-fashioned and stapled black-and-white (with color covers) underground comic book, on newsprint, approximately 6" x 9", inserted into a sleeve within the hardcover so it can be removed and enjoyed on its own.

Gary Panter has lived in Brooklyn since 1985. A multimedia/fine artist, his pioneering, post-underground comix work helped define the alternative comics movement in venues such as Raw, and his aesthetic remains influential. He is a Cullman Study Center fellow and a recipient of a Daimler/Chrysler design award and a Pollock/Krasner Foundation grant. He also has three Emmys for his design work on the classic PeeWee’s Playhouse television series.

Publishing these pages in all their oversize glory reveals the human gradations of [Panter's] inky sky, occasional marginalia, faint pencil often visible underneath the figures.
— The New York Times

It’s hard to overstate the importance of Gary Panter to the art world and to popular culture.
— Artforum

In Panter's drawings, a line is not the shortest path between two points, but a slow, wavering one, a termite's crawl with endless detours and distractions... this line is the constant. It intensifies his viewers' gaze, forcing them to reexamine forms they thought they knew.
— Art In America

Gary Panter, a prolific cartoonist who emerged in the eighties as the leading proponent of punk comics, has long been interested in blending mystical fantasy and literature to create wryly irreverent comics.
— The New Yorker