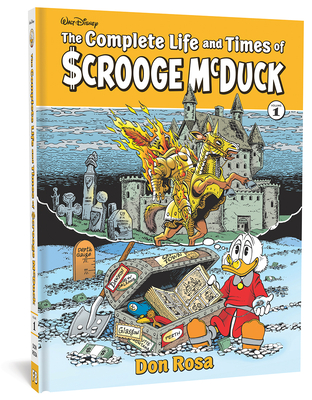 By Don Rosa
$35.00
This item is out of stock with our warehouse. Some recently published books may be in stock @ Room. Email to check.

The Definitive Collection, prepared under the watchful eye of cartoonist Don Rosa.

The Man, The Myth, the Mallard!

From his shoeshine stand as a plucky young lad to his globe-spanning quests for long-lost treasures as an adult, Uncle Scrooge McDuck has lived a life of legend — a legend founded by Scrooge’s creator Carl Barks and rocketed to new heights by Don Rosa in his signature series,“The Life and Times of Scrooge McDuck! ”Now you can read all 12 chapters of Rosa’s internationally acclaimed and Eisner Award–winning series, completely and meticulously restored under Rosa’s own supervision.Join Scrooge, a very young Donald Duck, the Beagle Boys, Flintheart Glomgold, and more for Scrooge’s epic life story — with plenty of guest stars along the way, including P.T. Barnum, Buffalo Bill, Geronimo, Jesse James, Jack London, Czar Nicholas II of Russia, Annie Oakley, Robert Peary, and President Theodore Roosevelt!

First active in comics as the indie creator of Captain Kentucky and The Pertwillaby Papers, Don Rosa (b. June 29, 1951) made his jump to official Scrooge sagas with the launch of Gladstone Publishing, the watershed 1980s publisher of fan-friendly Disney comics titles. Rosa later switched to producing Duckburg comics for the pan-European publisher Egmont, leading to his capturing a remarkable international fandom. He lives near Louisville, KY.