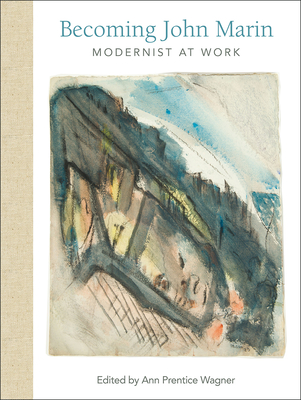 John Marin was a major figure among the cutting-edge circle of American modernist artists who showed his work in Alfred Stieglitz’s New York galleries from 1909 until 1950. A new collection of the artist’s work at the Arkansas Arts Center, given by Marin’s daughter-in-law, forms the basis of this first book of essays and images to concentrate on Marin’s drawings in the context of Marin’s life, his watercolors, and his etchings.

We follow Marin to his most famous subject matter: New York City and the coast of Maine. Foundational drawings and an unfinished watercolor of the towering Woolworth Building, still under construction when they were made in 1912, begin the story of a renowned group of watercolors first exhibited in 1913 at Alfred Stieglitz’s 291 Gallery and then at the ground-breaking 1913 Armory Show. Other images take us to lesser-known locales, such as the Ramapo Mountains in New York and New Jersey where Marin often painted when he couldn’t get to Maine. More obscure aspects of the artist’s career explored in this collection include portraits of friends and family, charming drawings of animals, and circus scenes.

Becoming John Marin invites readers to look over this important artist’s shoulder as he created and honed the sketches he would interpret into completed watercolors and etchings, illustrating the evolution of his style and methods as he transformed from intuitive draftsman to innovative modernist watercolorist and etcher.

Ann Prentice Wagner is curator of drawings at the Arkansas Arts Center. She previously curated at the National Portrait Gallery and the Washington County Museum of Fine Arts.