Choice Privilege: Whats Race Got To Do With It? (Hardcover) 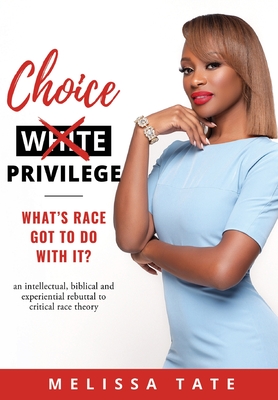 "My destiny has never been pre-determined by my skin color, more than anything else, it is being shaped by the choices I make daily, good and bad." This book follows author Melissa Tate's early life growing up in Africa and eventual migration to the United States. Tate contends that, in America, it is a person's good choices, not their skin color, that determines the upward trajectory of his or her life. After migrating to the United States at age nineteen for college, her experience in America has been a living contradiction to the false "white privilege" narrative. In spite of being "black in America," Tate has been able to achieve great success to which she credits to hard work, determination, good choices, and her faith in God. Her story, like many African immigrants, is at odds with propaganda peddled by the left. She lives a life of privilege as the fruit of hard work, doing things in the right order and prioritizing life in a way that places God first, then family, then her career. Tate discusses the cultural parallels between African culture vs neo-Black American culture as a means to explain the economic disparities seen between African immigrants (who tend to thrive in America) and Black Americans. The larger neo-Marxist agenda behind critical race theory ideology, as a plot to racially divide and conquer the America from within, is discussed extensively in this book. Tate exposes this dangerous and divisive ideology as a "false religion" that is antithetical to biblical principles and an assault on the teachings of Martin Luther King, Jr. Tate offers solutions on how America can overcome this agenda, heal the racial divide, and fulfil its God-given destiny as the beacon of light, freedom, and prosperity in the world. Melissa Tate grew up in Africa. At the age of nineteen, she came to the United States to attend college, where she earned a degree in business administration. After working for a large bank for three years as an investment advisor, Tate started her own business. By age twenty-seven, Tate had a thriving small business with several employees. She is married to her college sweetheart and is, today, a mother of three. In recent years, Tate has been making a transition out of business and into politics. She has become a vocal conservative author and social media influencer.