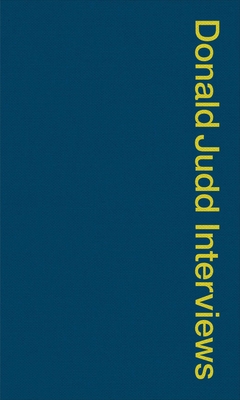 By Donald Judd, Caitlin Murray (Editor), Flavin Judd (Editor)
$39.95
This item is out of stock with our warehouse. Some recently published books may be in stock @ Room. Email to check.

Donald Judd Interviews presents sixty interviews with the artist over the course of four decades, and is the first compilation of its kind. It is the companion volume to the critically acclaimed and bestselling Donald Judd Writings.

This collection of interviews engages a diverse range of topics, from philosophy and politics to Judd’s insightful critiques of his own work and the work of others such as Mark di Suvero, Edward Hopper, Yayoi Kusama, Barnett Newman, and Jackson Pollock. The opening discussion of the volume between Judd, Dan Flavin, and Frank Stella provides the foundation for many of the succeeding conversations, focusing on the nature and material conditions of the new art developing in the 1960s. The publication also gathers a substantial body of unpublished material across a range of mediums including extensive interviews with art historians Lucy R. Lippard and Barbara Rose.

Judd’s contributions in interviews, panels, and extemporaneous conversations are marked by his forthright manner and rigorous thinking, whether in dialogue with art critics, art historians, or his contemporaries. In one of the last interviews, he observed, “Generally expensive art is in expensive, chic circumstances; it’s a falsification. The society is basically not interested in art. And most people who are artists do that because they like the work; they like to do that [make art]. Art has an integrity of its own and a purpose of its own, and it’s not to serve the society. That’s been tried now, in the Soviet Union and lots of places, and it doesn’t work. The only role I can think of, in a very general way, for the artist is that they tend to shake up the society a little bit just by their existence, in which case it helps undermine the general political stagnation and, perhaps by providing a little freedom, supports science, which requires freedom. If the artist isn’t free, you won’t have any art.”

Flavin Judd is artistic director of Judd Foundation. He has designed architectural spaces and has written for exhibition catalogues and other publications. He is codesigner and coeditor of Donald Judd Writings (2016), Donald Judd Interviews (2019), and Donald Judd Spaces (2020).

“This is a beautiful brick of a book. It’s got 88 color illustrations of Judd and Judd works – but honestly it’s perfect for being stuck at home and away from the real thing… painting a loose-limbed and irascible picture of the artist known for his gleaming perfectionism.”
— Ben Davis

“[Donald Judd Interviews] is a must-have for anyone who self-identifies as an artist.”
— Lee Cutlip

“To read the new book Donald Judd Interviews is to encounter one of art history’s greatest contrarians.”
— Alina Cohen

“In some ways, Judd was more prolific as a writer than as an artist.”
— Annie Armstrong

“Judd’s value to critics is in the economy of his style. He’s elegant, and pleasurable, if slightly risky to read; tranches of Judd may cause the mental equivalent of shortness of breath. Redundant syllables don’t exist.”
— Cal Revely-Calder

“Judd’s contributions in interviews, panels, and extemporaneous conversations are marked by his forthright manner and rigorous thinking, whether in dialogue with art critics, art historians, or his contemporaries.”
— Show on Show

"The interviews, dated between 1964 and 1993, record a spectrum of the artist’s attitudes, moods, recognition and facility at communicating his thinking."
— Kenneth Baker