How Trump Stole 2020: The Hunt for America's Vanished Voters (Paperback) 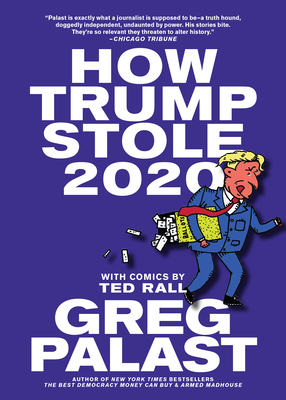 "No one has told our story of our missing voters like Greg Palast" - Rev. Jesse Jackson.

Follow investigative reporter for Rolling Stone, The Guardian and Democracy Now! Greg Palast as he hunts for the vanished voters of Trump's America.

Yes, the election's stolen but Palast shows you how to steal it back!

"Read this book. It might just save us! Greg Palast is the most incisive journalist on elections. Plus he's @##$% hilarious." --Josh Fox, The Young Turks

Palast lets you in on the nasty secrets of Trump-merica's democracy:
•  One in five mail-in ballots are never counted.
•  The chance of your vote being thrown in the garbage is 900% higher if you're Black than if you're white.
•  16.7 million voters were purged from the rolls in the past two years. Guess their color.

In How Trump Stole 2020, you meet the scamps, scoundrels and grifters (or "Governors" as we call them in America) doing the dirty to voters of color. Check out the photo of Palast confronting GOP Governor Kemp of Georgia whom Palast catches under a neon pig at a bar-b-que joint to ask Kemp if he's wiping away Black voter registrations to steal the election. The response: Palast gets busted.

The book includes an exclusive interview with Stacey Abrams on vote thievery--and a 48-page comic book from the piercing pen of Ted Rall.

You may know Palast as the fedora-wearing gum-shoe old-school investigative reporter who busted the theft of Florida in 2000 for The Guardian and in his New York Times bestseller, The Best Democracy Money Can Buy.

"Palast is one of our great investigative reporters. If you are not outraged by what Palast has uncovered, you have no heart. A searing indictment of our rigged electoral system." --Chris Hedges, Pulitzer Prize winning journalist

Born in Los Angeles in 1952, GREG PALAST worked as a government consultant and an investigator for labor unions before turning to journalism full time. A self described “reporting investigator” as opposed to an investigative journalist, he became a writer in order to alert a wider public to abuses he saw committed by governments, corporations, politicians, and lobbyists. For years Palast wrote a column for the Guardian called “Inside Corporate America,” and his articles have appeared in magazines and journals including the Nation, Harper’s, and In These Times. Palast’s 2002 bestseller The Best Democracy Money Can Buy, which covered in detail the fiasco of President Bush’s victory in Florida in 2000, appeared in 2002 and served as the basis for his documentary film Bush Family Fortunes. His most recent book is Billionaires and Bandits: How to Steal an Election in 9 Easy Steps, with illustrations by Ted Rall. Palast lives in New York City.

Twice the winner of the Robert F. Kennedy Journalism Award and a Pulitzer Prize finalist, TED RALL is a political cartoonist, opinion columnist, graphic novelist and occasional war correspondent whose work has appeared in hundreds of publications, including the New York Times, Washington Post, Village Voice, and Los Angeles Times. He is the illustrator of the full-length comic in Billionaires & Ballot Bandits: How to Steal an Election in 9 Easy Steps, written by Greg Palast.

"It’s a really great, eye-opening and illuminating book. Everyone should read it carefully." — Noam Chomsky

“Greg Palast is not only one of our nation’s finest investigative reporters but also, in How Trump Stole 2020, a master storyteller.”  — Thom Hartmann

“Keep hope alive ... Greg Palast and Professor Barbara Arnwine are America’s two top experts on vote suppression. I want everyone to get this book and make it a best seller.”  — Rev. Jesse Jackson

"One of my last personal heroes ... A must-listen and a must-read. Do not go one more day without ordering this book: exposé re how vote is already hacked, what you can do to protect your vote.... Unmissable."
— Naomi Wolf

"Palast, one our great investigative reporters, exposes one of the many mechanisms the corporate state uses to keep us enslaved. If you are not outraged by what Palast has uncovered you have no heart.”   — Chris Hedges

“Greg Palast is a real American hero trying to save our democracy. Read his work. It might just save us.” — Josh Fox, author and director of The Truth Has Changed and director of Gasland

"The most important book in a year of catastrophes. Palast is warning that the most decisive disaster is heading our way: theft of the 2020 election by Trump, his voter suppressors and election theft team. The train is barreling toward us with democracy as its explosive target." — Mark Karlin, Buzzflash

"Greg Palast is one of those inconveniently stubborn journalists who gets his teeth into a story and shakes it bloody right there in the middle of the parlor, dreadfully inconveniencing the pampered swells of the elite political press. ... Palast [has] dropped a bomb into the elections that has left credibility shrapnel all over the democratic process, if anyone cares to look for it." — Charles Pierce, Esquire