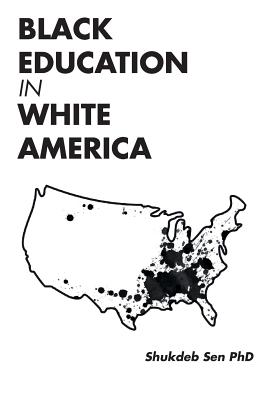 Brutality of slavery and its legacy transformed a large segment of the African-American population into a state of despair through the epigenetic modification of the structure of DNA that resulted in neurobehavioral, mental, and other pathophysiological conditions. Toxic stress and traumatic experiences inflicted on Black people altered the function of various metabolic pathways that affected a child's cognitive abilities and executive functions via epigenomic control passed from one generation to the next. Black Education in White America provides scientific evidence that explains how slavery could inflict a kind of destruction on millions of children, women, and adults.

One of the major offshoots of slavery was poverty, which affected all Americans, but its impact on African-Americans was the most destructive. Slavery, poverty, along with segregation created a massive force of dysfunctionality among Blacks, particularly children, which reflected on their academic achievements, including other pathophysiological conditions.

American education is in trouble. America followed segregated education since its inception. The higher education system is controlled by segregation, caste system, academic slavery, and racism.

Epigenetics influences the whole human life span beginning from prenatal, postnatal, childhood, adolescence, adulthood, and old age. Negative experiences impact all these time frames of an individual that can increase the risks of various physiopathological conditions, and lead to a higher morbidity and mortality rates. As epigenetics and its machinery of gene expression are influenced by the external environmental factors, positive educational experiences and healthy outlooks and habits can also theoretically influence epigenome to promote positive responses, which will decrease the risk of pathophysiological conditions and lower the morbidity and mortality rates.

Transformative power of education needs to be nurtured in America so that every child may educate him/herself with no hindrances from segregated, racism, and demagoguery.