A Woman's Game: The Rise, Fall, and Rise Again of Women's Soccer (Hardcover) 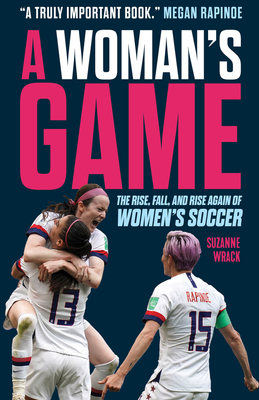 A compelling and comprehensive history charting the rise, fall, and rise again of women's soccer

Women’s soccer is a game that has so often been relegated to the margins in a world fixated on gender differences above passion and talent. It is a game that could attract 50,000 fans to a stadium in the 1920s, was later banned by England's Football Association grounds for being "unsuitable for females," and has emerged as a global force in the modern era with the US Women's National Team leading the charge.

A Woman’s Game traces this arc of changing attitudes, increasing professionalism, and international growth. Veteran journalist Suzanne Wrack has crafted a thoroughly reported history which pushes back at centuries of boundaries while celebrating the many wonders that women's soccer has to offer.

With the enormous success of the World Cup, 82 million US viewers for the USWNT against Netherlands in the 2019 World Cup Final, enlightened and outspoken players like Megan Rapinoe helping raise the profile of the game across the world, and a fully professional top-tier league going from strength to strength in both the US and the UK, the time cannot be better for this in-depth look at the beautiful game.

Suzanne Wrack covers women's soccer for The Guardian and previously worked as a Senior Broadcast Journalist for BBC Sport. She was shortlisted Sports Journalist of the Year at the British Press Awards 2019, for the Football Supporters Federation Writer of the Year in both 2018 and 2019, and was highly commended in the Media Initiative of the Year category at the 2018 Women’s Sport Trust ‘Be A Game Changer’ awards.

"This book celebrates [the women's game], and the teams and individuals who helped the sport develop into today’s nationally and internationally recognized phenomenon" — Times Literary Supplement

"This book is a good examination of sports within a larger historical context and a serious look at the future of the women’s game." — World Soccer Talk

""It’s not a PR job for the sport, pointing, as it does, to the innumerable problems that the women’s game still faces, and suggesting a path ahead and a way of addressing them" — The Irish Times